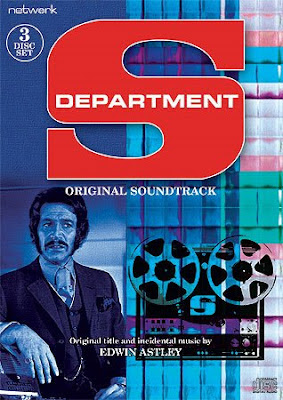 Network has announced their newest classic ITC soundtrack (following previous releases of The Prisoner and Man In A Suitcase). This time Jason King's first series, the wonderful Department S gets the Network treatment. According to their site:

Never previously released and compiled from the original master tapes, this three-CD set comprises Edwin Astley’s celebrated music for Department S, containing over 180 pieces which were specially commissioned for the series. Including extensive liner notes from archive television historian Andrew Pixley, this set is an essential purchase for all ITC aficionados.

Right now, it's available exclusively from Network's website. As awesome as this is (and it is awesome; I'll be getting it for sure), here's hoping that Network's next project is Ken Thorne's Persuaders scores!
Posted by Tanner at 1:29 AM

Ah, Jason King. First heard about him as an "influence" on The Invisibles' Mr. Six.

I think I'll be needing that soundtrack. I only wish it was being released on Vinyl where that art could be huge and King-era appropriate.

Speaking of being reminded of things, your previous post on Casanova reminded my of equal parts Gideon Stargrave (invisibles) and the poster art for In Like Flint. I think I need to check that out.

I am sure this would be enjoyable, but I really want to hear the whole of Peter Wyngarde's 'Sex Raises It's Inquisitive Head' album.

I have found some snippets on a myspace site.
Click Here:

Listen to the track 'Rape'. Obviously it's not politically correct...but wow...Wyngarde was doing music like this in the early 70'S!!!

Network has released soundtracks to The Prisoner, Randall & Hopkirk(deceased), Man in a Suitcase, and now Dept.S. Am I the only one wondering "WHERE THE HELL IS THE MULTI-DISC RELEASE FOR THE SAINT?"