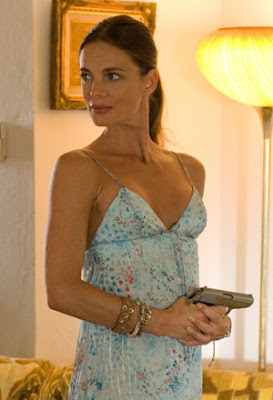 Variety reports that Burn Notice scored big ratings with its second season debut last week. In addition to being the top-rated cable program Thursday night, Burn Notice also managed to "top its firstrun ABC and CBS competition in key demos," according to the trade. It was the second-best score for a scripted cable series this year, behind USA's own Monk finale in February. Here are all the stats, including some that will probably mean nothing to anyone outside the TV industry: "According to Nielsen nationals, Burn Notice averaged a hot 1.8 rating/6 share among adults 18-49 and 5.39 million viewers overall, a 20% gain in the demo and a 35% improvement in overall audience vs. its series debut of last summer."
Posted by Tanner at 8:28 AM