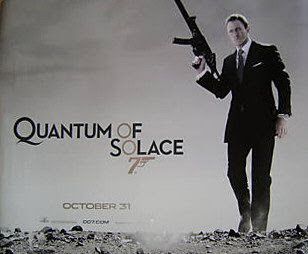 A new UK quad poster for Quantum of Solace has popped up online. It apparently appeared initially on Ebay (hence the low quality of the image), and was spotted by IMP. From there, Dark Horizons picked it up. So that's the history of it. Is it real? Probably. It seems line line with the way Sony are marketing the film, and it's neat that it could be the "other side" of the teaser image. Of course, it could also be a fake made from combining the final shot of the trailer with elements from the teaser poster and the website... But I suspect it's real and we'll see a higher quality version shortly.
Posted by Tanner at 1:26 PM