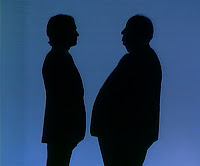 Sometimes it’s good to define certain things that come up again and again in spy movies–and in reviews here. I sometimes take certain terms for granted, but I think we can all used the occasional refresher. A 1972 Dick Cavett interview with Alfred Hitchcock that aired on TCM yesterday provided just such an opportunity when the two men discussed one of the most crucial ingredients of any spy movie. On the show, Cavett asked Hitchcock to define "MacGuffin." Hitch replied succinctly, "A MacGuffin you see in most films about spies. It is a thing that the spies are after. In the days of Rudyard Kipling, it would be the plans of a fort on the Khyber Pass. It could be the plans of an airplane engine. And the plans of an atom bomb. Anything you like. It’s always called ‘the thing that the characters on the screen worry about but the audience don’t care.’"

Then the master gets a bit more oblique. "Someone asked, what is a MacGuffin? And there’s a, it’s described in a scene in an English train, going to Scotland. And one man says to the other opposite him, he says, ‘What’s that package above your head there?’ And the other man says, ‘oh, that? That’s a MacGuffin.’ And the other man says, ‘Well, what is a MacGuffin?’ He says, ‘Well, it’s an apparatus for tracking lions in the Scottish Highlands.’ The man says, ‘but there are no lions in the Scottish Highlands.’ He said, ‘then that’s no MacGuffin.’"

Even Dick Cavett is confounded by that elaboration. "Thank you for clearing that up for us," he says sarcastically.

Cavett does his best to clarify, "And you adopted that word as the thing, the letters, the plans–"

But Hitch cuts him off, getting quickly back to the basics: "It’s the thing that the spies are always after."

Presumably the story about the men on the train is meant to illustrate that it just doesn’t matter what a MacGuffin is. Fans of the director have probably heard that story before as it pops up again and again on various DVD features and commentaries, and I think it was also recounted in Francois Truffaut’s epic, book-length interview with Hitchcock. Unfortunately, rather than trying to draw out new stories, Cavett basically tries to get Hitchcock to recount things he already said to Truffaut. But it’s always amusing to watch the man speak.

Hitchcock aroused the suspicions of the government for using plutonium in Notorious in 1944, when atom bombs were still top secret. Of course that particular MacGuffin would be used (quite effectively) again and again over the years, right up through today. I can’t even recall the MacGuffin in North By Northwest, which would probably please Hitchcock as ultimately the MacGuffin itself doesn’t matter, just what the characters would do to get their hands on it. Two of the most famous MacGuffins come from Humphrey Bogart movies that aren’t spy films: the letters of transit in Casablanca and, of course, "the great whatzit," the titular black bird of The Maltese Falcon. The glowing briefcases in Kiss Me Deadly and Pulp Fiction also come to mind, as does the NOC list in the first Mission: Impossible film and, of course, the objects of Indiana Jones’s various quests, like the Ark of the Covenant, the Sankara Stones and the Holy Grail.

Eurospy MacGuffins tend to be rays of some sort (usually of the deadly variety) or that old chestnut, microfilm. James Bond has encountered innumerable MacGuffins throughout the years. Some of the standouts include the Lektor decoder device, the ATAC device ("SQUAWK! ATAC to St. Cyril’s. SQUAWK!"), the missing Vulcan with its nuclear payload, the submarine tracking thingie in The Spy Who Loved Me and the GoldenEye satellite controller. Outside of hardcore Bond fans, who remembers what an ATAC does? (Even in the movie it’s pretty ambiguous.) It doesn’t matter to us. Just to the characters on screen. As Hitch says, it’s the thing that they’re all after–and the very engine that drives the story.
Posted by Tanner at 12:54 PM

In North x Northwest: the microfilm contained inside the statue bought at the auction would probably count.