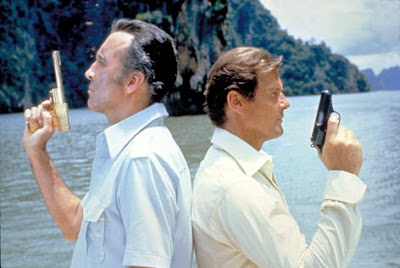 Christopher Lee To Be Knighted

At the end of Ian Fleming's The Man With the Golden Gun, James Bond turns down a knighthood. Now his adversary in that adventure, Scaramanga, is getting one instead! One of James Bond's greatest foes will be recognized with a well-deserved honor in a ceremony this year, and the great Christopher Lee will be knighted. (It even made the front page of Yahoo.) Congratulations to the future Sir Christopher! From his James Bond role to Dracula to Sherlock Holmes to The Wicker Man to The Lord of the Rings, Lee has performed in hundreds of films and always lends even the least of them an undeniable gravitas. His contribution to the British film industry–and to film in general–is tremendous, and it's only right that he be a knight. I'm sure he'll relish the title. Lee's next role will see him return to the studio that made him famous to begin with when he stars in the new Hammer movie Invasion of Privacy.
Posted by Tanner at 8:07 PM