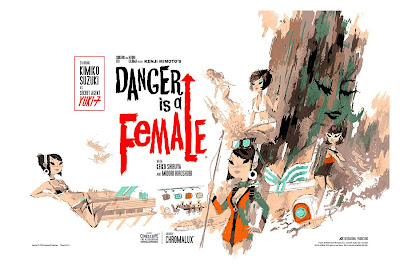 Retro Secret Agent Yuki 7 In A Kiss From Tokyo

David from Spy Bop Royale alerted me to this awesome piece of retro spy animation. It's a newly-created trailer for an unfortunately non-existent 1964 spy movie called A Kiss From Tokyo featuring slinky secret agent Yuki 7. It looks equal parts You Only Live Twice and Deadlier Than the Male–with healthy dollops of Flint, Fathom, Steranko and just about everything else thrown in for good measure. (Just go watch it now, then come back and read more.) It's also part of a much larger graphic design concept by artist Kevin Dart based on Sixties spy style. Dart and animator Stephane Coedel directed the movie trailer; Dart has created all the artwork and merchandise tie-ins you'd expect from an actual Sixties spy feature. In fact, he's created artwork for a whole series of Yuki 7 films with wonderfully spot-on titles like Roman Rendezvous, To Catch A Temptress and Danger Is a Female (I love that he references the obscure Death Is a Woman, which featured similar bikini-and-speargun poster imagery to Deadlier Than the Male). There are Yuki 7 paper fashion dolls, posters, T-shirts... you name it. But the centerpiece of this massive art project (which also includes a gallery show) is an art book called Seductive Espionage: The World of Yuki 7, due out this July from publisher Fleet Street Scandal and available for preorder now. Dart explains the concept on his blog:

Just a few days later [collaborator Ada Cole] sent me some brilliant articles [she'd written for the book] which included an interview with Kimiko Suzuki (the [fake] actress who plays Yuki 7) in the made-up fashion magazine Elan, and a story about Yuki’s meticulously crafted costumes for Danger is a Female. I was sold. Ada and I had some more conversations about how to break the book apart into articles that would tell a behind-the-scenes story in bits and pieces without explicitly spelling it out for the audience. We also delved into the character and motivations of all the big players in the film franchise’s history.

So it's not a real movie or a comic book (too bad, because watching that trailer really made me want to see such a movie!), but the art book will still tell a story: the behind-the-scenes story of a Sixties spy franchise that never was! I think that's an awesome idea, and I can't wait to get a peek at it. Read more about the genesis of Dart's idea, and his influences, in this blog post. And poke around his blog and the publisher's website for more glimpses of the artwork you'll see inside!
Watch the trailer here.
Posted by Tanner at 7:37 PM