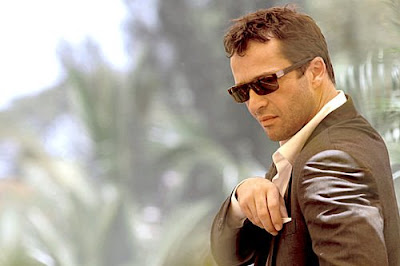 TV Review: The Philanthropist Is No Saint

I applaud NBC's attempt at an action-adventure series shot in actual locations around the world. It's not done often these days. Alias, for example, was famous for its "Burbank as Barcelona" globetrotting, similar to the establishing shot/Elstree backlot tricks of the original Saint. But I'll always have a soft spot for shows like I Spy, The Persuaders and Return of the Saint that actually go on location. The Philanthropist shoots on location. The pilot episode takes place in Nigeria. But locations alone, unfortunately, do not a great show make.
The pilot episode of The Philanthropist is hampered by an extremely cumbersome framing device through which the audience is hammered mass quantities of exposition. Billionaire Teddy Rist shares his story so far with an attractive bartender he's trying to pick up, and throws money at her to hear the rest of his story. The audience receives no money, but has to endure it as well. The narration is kind of painful, and the character arc a bit forced. Honestly, I prefer the characters of the Sixties ITC adventure series who didn't really need arcs. They just were. There's Simon Templar and he helps people. A mysterious past on the other side of the law is constantly alluded to, but never spelled out. It works wonderfully. The Philanthropist spells everything out laboriously and the result is, well, laborious. Furthermore, the flashback structure robs the action scenes of any weight. We see Teddy shot at while riding a motorcycle through the jungle, but we already know he gets out of it. There are no stakes. All of the action sequences play out that way.
Producer Tom Fontana has claimed that this idea arose independently of the Saint project he was also developing with star James Purefoy, but that just seems impossible to believe. There's too much in common between The Philanthropist and The Saint, right down to the narration, which recalls Roger Moore's direct addresses to the audience in his Saint series. (Those addresses were always briefer, though, and better for it.) At one point, Rist goes out onto the balcony of a glamorous hotel overlooking an exotic city and another character says, "So you're the famous Teddy Rist?" Purefoy gives him a sideways glance that certainly ought to have a halo over it and acknowledges him. It's the classic Saint introduction, and it caused me one of many pangs for what might have been.
The Philanthropist looks from its pilot to be essentially a sappy version of a Saint-like show. It's bogged down in its own hamfisted attempts to manipulate the audience and call attention to causes and issues. It desperately wants to be Extreme Makeover: Home Edition, but would have been much better off settling for being, well... The Saint. Audiences don't always need to have their heartstrings pulled to enjoy a good hourlong adventure series shot in exotic locations.
The Philanthropist is certainly not The Saint. It's just a constant reminder of what might have been.
Posted by Tanner at 12:53 PM

Email ThisBlogThis!Share to TwitterShare to FacebookShare to Pinterest
Labels: Reviews, The Saint, TV