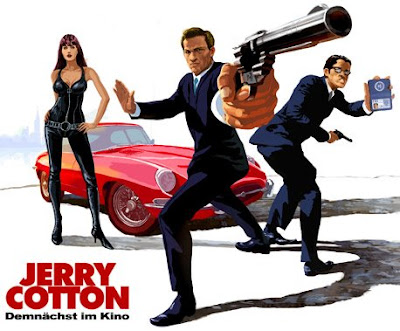 The man in the red Jaguar is back! So blare the teaser posters for the 2010 version of Jerry Cotton, Germany's most famous Eurospy reinvented for the age of... the reinvented OSS 117. Yes, it's another Sixties Eurospy hero reimagined in a new comedic take... and I, for one, can't wait! Now we get our first glimpses of the new film. See Christian Tramitz in action as Jerry Cotton! See Jerry undercover, in disguise! See Jerry's red Jaguar in action! There's all this and more in three behind-the-scenes videos posted on the film's official German website (and also on YouTube). That's the catch, of course; it's all in German, but you really don't need to understand the language to get a taste of the movie. In addition to all that stuff I just hyped, you'll also see some of the sets (including FBI headquarters) and a quick shot of the new "Cotton Girl," Monica Cruz, performing a very sexy nightclub act. (Which is totally in keeping with the established series.) The second video is the most English-friendly, as it's mostly behind-the-scenes shots edited together like a trailer to Peter Thomas's original Sixties Jerry Cotton Theme. Unlike the recent OSS 117 revival movies, the new Jerry Cotton appears to be contemporized rather than stuck in the past. His Jag, however, remains the vintage model.