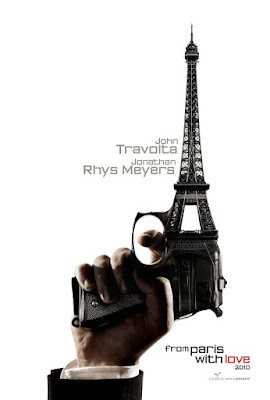 From Paris With Love Poster Revealed

Wow! Now that's a spy poster! Lionsgate has provided the teaser poster art for the next neo-Eurospy movie from Luc Besson's EuropaCorp, makers of Taken, Hitman and the Transporter movies. Like the Eurospy movies of old, From Paris With Love doesn't try to disguise itself as something else; rather it blatantly wears what it is on its sleeve: a James Bond rip-off, and damn proud of it! It's evocative title is similar to all the Goldfinger-sounding Eurospy titles (or parts of titles) of the Sixties, like Goldsnake and Goldginger and Goldman, etc. And that artwork is truly amazing: a simple image that conveys perfectly what the film is with a clear mixture of action and location, two crucial elements of any Eurospy movie. I love it! EuropaCorp COO Pierre-Ange Le Pogam seems to get that, too. In the movie's press release, he says, “From Paris With Love achieves the holy trinity of the action genre: great stars, terrific action and amazing locations.” I'm glad that the company is clued into the importance of locations. I sometimes feel like the Bond producers have forgotten that, and the modern films aren't quite as travelogue-y as they should be. I have to disagree with Le Pogam about the stars, though. I'm very curious to see Rhys-Meyers, who did a great job in M:I-III, in a big spy role. But I just can't get too excited about Travolta these days. You just know he'll overplay everything, and go way too over the top with a superspy character. Hopefully not enough so to detract from the movie though. I'm really, really looking forward to this one–especially after that poster! (Click it to expand it to a huge, hi-res version.)
From Paris With Love is directed by Taken's Pierre Morel and written by Besson and Adi Hasak. According to the press release, the plot finds a low-ranking intelligence operative (Rhys Meyers) working attached to the U.S. Embassy in Paris in way over his head when he partners with "a wisecracking, fast-shooting, high-ranking U.S. agent" (Travolta) who’s been sent to Paris to stop a terrorist attack.
In other neo-Eurospy news, IESB reports today that writer Kyle Ward has been hired to pen a sequel to Hitman.
Posted by Tanner at 12:37 PM