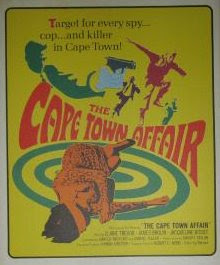 There’s really not much to recommend about The Cape Town Affair. Not much at all. Pretty much the only thing it has going for it are the colorful shots of Cape Town in 1967, and director Robert Webb doesn’t even take full advantage of his exotic location. (And I use the term "colorful" somewhat ironically because there is barely a black person to be seen in any of the bustling streets of Apartheid South Africa.) The film is a needless remake of Samuel Fuller’s 1953 film noir classic Pickup on South Street. The action is shifted to Cape Town in the late Sixties, but the barely-updated script still feels like a Red-baiting Fifties film noir with lines like, "Don’t you want to help us fight Communists?" and ludicrous slang like "donkey" (top cop) and "picks" (pickpockets). I don’t know if the jargon is true to the Cape Town underworld of that era, or merely leftovers from Fifties America, but it doesn’t work here.

James Brolin plays what I suppose is meant to be the "hero," a pickpocket named Skip who gets caught up in espionage when he steals a wallet that turns out to contain microfilm from a secretary named Candy, played by Jacqueline Bisset. While Brolin looks slick, his character actually manages the unlikely feat of being a bigger jerk than any of his Eurospy ilk! Yes, he’s even a bigger, sleazier, more loathsome asshole than Joe Walker in the Kommissar X films! Skip’s specialty is slapping women around, which makes him a good match for Candy because her specialty is getting slapped. Really, the most action you get in this movie is extended scenes of women (usually Bisset) getting slapped by men. There’s so much slapping, in fact, that it would be comical if it weren’t so sickening. Candy manages to get slapped around by both the hero, Skip, and the villain, Joe. Joe is her boss, and she thinks that he’s a regular businessman, never suspecting that he’s really a Communist spy. After Skip makes off with the microfilm from her handbag, Joe tasks her with tracking him down and getting it back. All of the men in her life are callous jerks.

The police are also looking for Skip because the South African security services were keeping Candy under surveillance and saw Skip make off with her bag... but didn’t stop him, for some reason. Both they and she manage to track down Sam, a woman who specializes in fingering pickpockets for the police. (There was a nifty slang term for that, too, but I forget what it was.) Sam is played by top-billed Claire Trevor as a boozy Shelly Winters wannabe, which is too bad because Winters at her booziest owed a lot to Trevor, who played that part to perfection in earlier, better films like Key Largo! In The Cape Town Affair, however, Trevor is painfully over-the-top and hard to take, which is regrettable because there’s so much of her.

Candy then goes back to Joe empty-handed and complains that Skip hurt her jaw, but Joe tells her she needs to go back to Skip and get that microfilm. He implies that she should be prepared to sleep with him if necessary to retrieve the film. She’s rightfully offended and reiterates that he hurt her... until Joe offers her a lot of money and asks if she "understands" that. And she does. So she still goes back to seduce Skip, despite all the smacks! So much for her morals.

Of course, Candy has now fallen for Skip. Why? Because of his charm? Because he’s nice? No! He’s given her no reason to; he’s treated her horribly, but obviously that’s what she looks for in a man. Even after she reveals her feelings for him, he continues to slap her a lot and insult her. His first reaction to anything she says is to slap her silly, even when she’s crying. And he never slaps her just once, either, but again and again and again. The intent seems truly evil. You'll cheer for her when she finally conks him on the head with a glass bottle, even though at that point she’s preventing him from doing what needs to be done.

Sam overacts some more and delivers some terrible, wannabe film noir dialogue like, "When I came in here tonight you saw an old clock winding down." It might have worked well a decade earlier in black and white, but the dialogue–and her histrionics–seem outdated and out of place in a Sixties spy movie. While Sam’s overacting, Candy’s getting slapped again, of course, this time by Joe who goes even more overboard than Skip does. He chases her around a room slapping and wrestling her for about five minutes before finally shooting her for good measure. With the only remotely likable character hospitalized, the men duke it out in a fistfight and foot chase in which the primary obstacles are some carelessly placed chairs. At least Skip works things so that his pickpocketing skills come into play in the end... sort of.

I’m really not ruining anything for you to say that things work out for our ostensible heroes, and Skip and Candy end up together. If she still likes him, I guess she deserves that fate. He kindly repays her affections by lifting a bill from her purse to pay for the big romantic date they’re on! Oh, Skip! It’s a fitting conclusion to the film and presumably a harbinger of the way they’re relationship will continue after the credits role. (I see a lot of slapping in her future.)

Despite some nice location photography and an appealing, jazzy score, The Cape Town Affair is a thoroughly unpleasant affair, and I don’t recommend it. This is a film that truly would have benefited from receiving the Mystery Science Theater 3000 treatment! It's not even worth the $6.99 (and under) pricetag of the bargain basement DVD.
Posted by Tanner at 11:45 PM

Great review. I am possibly more forgiving of this film than you because I saw it straight after Pickup on South Street and saw it for a clone, rather than looking at it as a stand alone piece released in the late sixties (and you're right the dialogue would have seem stilted back then - but it just swept over me).

Your review puts me in two minds though. One part of me wants to watch the film again - now that my memory has faded - and to watch it with fresh eyes. But you make the film seem so thoroughly repellent in the extreme that I think I can never watch it again.

Is this South Africa's only contribution to sixties spy mania?