Robots and supercomputers and evil machines are such common themes in spy movies (especially Eurospy movies) that they feature prominently in quite a few films I've already reviewed. But with nearly three years' worth of old posts that tend to get lost in the depths of the blog a few months after they're first published, this whole COBRAS "Man vs. Machine" event provides a good excuse to dust off some of those old reviews and repost them. (Hopefully the older ones, like this, will be new to quite a few readers I've picked up since then!) In this case, it allows me to revisit one of the Kommissar X movies. That's one of my favorite Eurospy series, despite (or because of?) the fact that it features probably the most loathsome of all Eurospy heroes in Joe Walker (Tony Kendall)! Kiss Kiss, Kill Kill was a particularly fun entry that (eventually) found Walker and his perpetual cohort Tom Rowland (Brad Harris) facing off against an army of beautiful blond robots. Well, they were called robots, but they were actually robotized humans (another common occurrence in the Eurospy world), made to do their master's bidding with daily injections of some sort of robot formula. Read on...

The Kommissar X movies sort of have one foot in the Krimi genre (German mystery/crime films, especially popular in the late Fifties and early Sixties) and one in the Eurospy genre (which took over everything after Goldfinger hit). Walker and Rowland are detectives who get involved in globetrotting espionage cases. Walker’s a private eye (supposedly the best in the world), and Rowland is a New York City Police Captain who is for some reason assigned to cases all over the world.

When we meet Joe Walker (accompanied by his catchy theme music, "I Love You, Joe Walker"), he’s... somewhere, and he’s taken a case to do... something. Neither is entirely clear. Soon he meets someone else, who’s dressed very similarly to him, confusing matters, and they fight, because, as I mentioned before, Walker likes to punch people. It turns out this other man is none other than Captain Tom Rowland, and the two are best friends. A group of people who I at first thought were milkmen, but then realized were supposed to be policemen, cheer and clap. Meanwhile Joan, a blond assassin, blows someone up in an exploding outhouse. (Yes, exploding outhouse! That’s definitely creative enough to make up for naming your assassin "Joan.") Later, she and another woman both hire Walker to find a missing physicist, and soon he and Rowland are working the same murder/missing person case.

You’ll be no less confused watching the movie.

Additionally, every male character wears a red shirt at some point, which later also turns out to be the uniform of the villain’s henchmen, so events are somewhat difficult to follow. 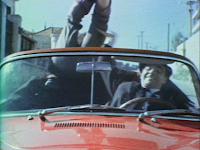 Walker drives a nifty convertible Porsche (a red one) which sadly isn’t equipped with an ejector seat. Walker makes do, though, by pulling the unwelcome passenger’s seat belt release, then stopping suddenly so he jerks forward, then punching him so that he flies out the back of the car. Not graceful, but effective. Who needs Q? Tipping their hat to Bond, the car does have a homing beacon very similar to 007's, and Walker (evidently something of an interior design buff) says of the villain’s house, "This place is done up in early Ian Fleming." If only! But it’s close enough.

Walker also gets a Geiger counter, something Bond uses a lot in his first few adventures. "What do you expect to find with that Geiger counter?" inquires Rowland. "Unfortunately, not girls," cracks Walker, revealing what’s always on his mind. And he manages to find plenty of them even without the help of a Geiger counter.

In fact, he soon encounters a whole army of robotic blondes clad in black leather. They kidnap him and all pile into the back of a battered El Camino (glamorous, I know), with Joe in the middle. He looks positively delighted, and promises, "I’m not going to escape from this!" "I Love You, Joe Walker" kicks in again on the soundtrack, and the women drive Joe to the villain’s underground base. 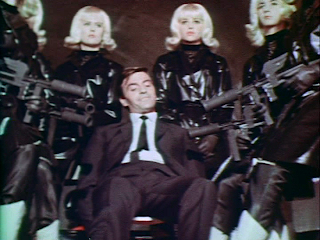 Not content with ripping off only one Bond movie, the lair is a low-rent combination of two famous Ken Adam sets: Dr. No’s nuclear facility and Goldfinger’s Fort Knox. The villain, Oberon, has been stockpiling gold to... irradiate, I guess? I’m not quite sure what he gains by irradiating his own gold; Goldfinger’s plan was to irradiate the United States’ gold reserves, for the benefit of China. I guess Oberon wasn’t paying careful attention. Who cares? Neither should you, here; just go with it. Whatever the plan was, apparently it would have been good, because Oberon exclaims to the meddling Walker: "You have just destroyed my dream of becoming the most powerful man on Earth!"

So, to recap: Gold + Radiation = Power

It certainly seems like a feasible equation; I’m just not convinced Oberon had actually worked out the optimal way to combine those assets.

He was similarly short-sighted in building his army of robotized women. They require a fresh injection every 24 hours to keep them drugged into doing his bidding; without it they become instantly susceptible to Walker’s, er, charms. Luckily, Oberon also has a loyal male henchman, but he’s not really that big or anything. (In fact, his only "scary" factor seems to be that he has a beard.) Still: gold, nukes, fetishized robot women, a beard and an underground lair are more than enough to react with Joe Walker and form a highly satisfying, explosive (obviously!) finale.

Things turn out the way they usually do in this sort of situation, and the guys each end up with some girls. One of Joe’s girls, though, is the jealous type, and she does what we’ve all wanted to do the entire movie and uses a judo movie to throw him into the water. Everyone else, including Tom, laughs at him. So do we. It’s cathartic.

Kiss Kiss, Kill Kill only really contracts a plot about halfway through, but once it does it’s impossible to turn away. If you happened to catch it on TV during the second half, you’d probably think you’d just discovered a really GREAT Sixties spy title, and might even list it as one of your favorites. Unfortunately, if you'd turned it on during the first half, you probably would have turned it off.

But you would have missed out on a whole lot of fun.

Read my other Kommissar X reviews here:
The Kommissar X Collection (DVD)
So Darling, So Deadly
Death Is Nimble, Death Is Quick

Also be sure to read Jason Whiton's take on this film as part of his examination of "fembots" at Spy Vibe for the COBRAS "Man vs. Machine" week here!
Posted by Tanner at 4:45 PM