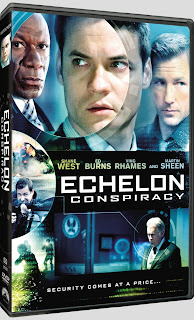 So while we're on the subject of men fighting machines, and supercomputers bent on world domination, does anyone remember Echelon Conspiracy, that movie that wasn't Eagle Eye that was out briefly this past spring? Well, even if you don't, you'll be able to brush up on it now because DVDActive reports that Paramount will release it on DVD and Blu-Ray on July 21.

Echelon Conspiracy, starring Edward Burns and one-time Bond baddie Jonathan Pryce, concerns a guy whose cell phone starts giving him mysterious instructions that attract the attention of the CIA and the NSA, so it's definitely a similar premise to Eagle Eye. According to Wikipedia, ECHELON itself is "a name used in global media and in popular culture to describe a signals intelligence (SIGINT) collection and analysis network." In other words, an all-knowing computer system, pulling data from phone calls and email and eavesdropping and other electronic resources all over the world via sattellite. It comes up again and again in modern spy movies and TV shows, from Alias (which made wide use of it) to the aforementioned Eagle Eye. Echelon is the very embodiment of the whole "Man vs. Machine" theme we're exploring this week. The idea of an all-knowing computer system is a scary one that comes up again and again in popular culture in various forms, from Metropolis to Alphaville to 2001: A Space Odyssey to Terminator. It's even more scary if it becomes sentient.

The website for Echelon Conspiracy, however, diminishes that scariness. It contains a feature that lets you input questions for ECHELON and have a "conversation" with the scary know-it-all machine. I had a conversation with ECHELON on its own website last February that's worth reposting:

Visitor [That's me]> when does echelon conspiracy open?
ECHELON> What if I said it never does?
Visitor> Does it?
ECHELON> Suppose I said it does.
Visitor> Is the movie any good?
ECHELON> If it is, then I'll be very surprised.

Yes, that's how the computer advertised its own movie. Super-intelligent? I'm not sure. So maybe we're further away from sentient computers taking over the world than popular culture would have us believe!

All kidding aside, though, the movie looks at least worth a look on DVD. Who knows. Perhaps it will be a worthwhile addition to the "Man vs. Machine" part of the spy genre. It can't really be much worse than Eagle Eye, can it?
Posted by Tanner at 1:45 PM