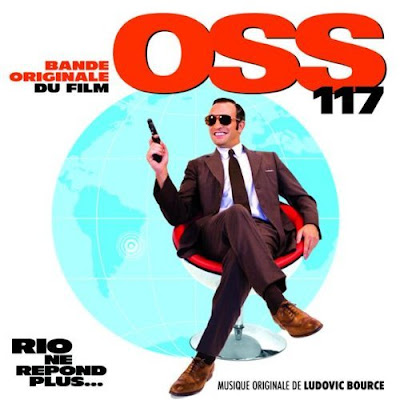 I've been searching and searching for a soundtrack CD for the comedic French Eurospy revival/James Bond parody OSS 117: Lost In Rio (OSS 117: Rio Ne Répond Plus) ever since the film came out in France in April, but to no avail. Turns out I was looking in the wrong places! Luddite that I am, I was fixated on finding a CD, and Amazon.fr proved a failure on that account. But today I happened to search for "OSS 117" on iTunes, and lo and behold, there it was! (And had been since April, as a matter of fact.) As best I can tell, the soundtrack (or "bande originale" as they say in France) is available as a digital download only, in any country. A little more searching, however, revealed that the American Amazon actually offers the MP3 album for two dollars cheaper than iTunes at $7.99. While I'd love to have a physical CD to place on the shelf next to my CD soundtrack of the first film, OSS 117: Cairo Nest of Spies, I'll take what I can get! The Sixties-set sequel boasted a terrific score, evocative of both the era and the genre, by Ludovic Bource. There were tracks reminiscent of everything from Matt Helm to Flint to John Barry to George Martin. In short, it's a most worthy addition to any spy fan's iPod.
(And I know, I still owe you guys a review of this film. Thank you for your patience. I'll get it up eventually!)
Posted by Tanner at 11:40 PM