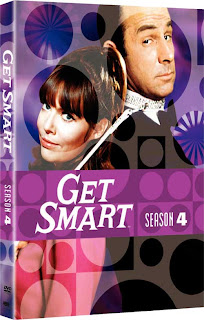 Good news for all the Don Adams fans out there! Would you believe... two new DVD releases on the horizon... on the same day? First, for all those who didn't shell out for the giant TimeLife Get Smart set, HBO Home Video continue their releases of individual seasons with Get Smart: Season 4 on September 4. According to TV Shows On DVD, the four-disc set (containing twenty-six episodes) will, as usual for this series, be available at the bargain price of $24.98–and certainly even less at various online retailers. Adams' other famous spyish character, Inspector Gadget, will also finally return to DVD that same day, from Fox Home Entertainment. (A Season One set was released years ago by Shout! Factory, but has since gone out of print and shot up in value.) Inspector Gadget: The Go Go Gadget Collection will be a single-disc release containing eight episodes of the classic cartoon. TV Shows On DVD has all the details.
Posted by Tanner at 11:02 AM