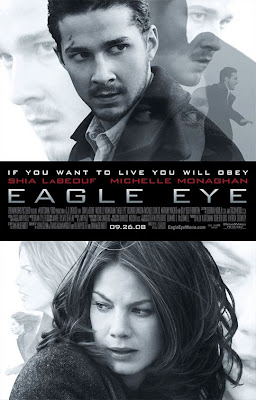 Here's one from just last fall that really epitomizes the Man vs. Machine theme as portrayed in contemporary movies. So much so, in fact, that it appears to have already been remade to some extent in Echelon Conspiracy! Shia Labeouf seems to specialize in playing men who find themselves pitted against machines again and again in movies produced by Steven Spielberg. This summer he'll take on an army of transforming robots for the second time. Eagle Eye may appear slightly more down-to-earth than that... but not really. It's pretty much equally far-fetched, only with a more cerebral machine as antagonist. Read on for the original review...

Eagle Eye had the unfortunate fate of opening up with beepy text typed across the screen right after Burn After Reading made beepy text too hilarious to take seriously (for at least a few weeks), and so, whether it was the fault of the movie or not, I found myself already chuckling in the first few seconds of what’s supposed to be a serious techno-thriller. By the end of the movie, however, most of the theater was laughing, so I suppose maybe it set the right tone after all. Eagle Eye is a supremely silly movie–and probably more entertaining for that than for any legitimate suspense it ever manages to generate on its own.

Even that’s a bit unfair. Eagle Eye doesn’t really generate anything on its own; instead it summons up a slew of images and sequences from other movies, and often relies on the audience’s associations with those movies to elicit suspense, thrills, awe, or whatever that scene conjured up in the original movie it was used in. Film buffs will catch snippets of countless classics from every era. Off the top of my head, I can recall spotting bits of Saboteur, Strangers On A Train, The Man Who Knew Too Much, North By Northwest, In Like Flint, 2001: A Space Odyssey, The President’s Analyst, The Conversation, The Fugitive, Enemy of the State, The Matrix, Live Free or Die Hard and many more. Perhaps Eagle Eye is some sort of intricate, post-modern Finnegans Wake of film studies, only fully appreciable by scholars who take the time to decipher every allusion and put them all together into some whole far greater than the sum of its parts. If that’s the case, though, it’s sure to fly over the heads of most of the audience members who contributed to it’s $29 million haul this weekend; the majority of them were probably seeing these images for the first time. So how is the film judged on its own visible merits? Still silly.

As you’ve no doubt gleaned from the trailer (which seems to have shown before every movie I’ve seen since mid-May when it debuted with Indiana Jones and the Kingdom of the Crystal Skull), the plot finds Shia La Boeuf and Kiss Kiss Bang Bang’s Michelle Monaghan framed or extorted into following the orders of a disembodied, female phone voice which commands them to commit crimes, make leaps of faith (and logic), and go on the run across the country. Who is the mysterious voice? Who’s behind all this? Who’s manipulating every cell phone, security camera, GPS device and automated crane in the vicinity?

Well, I’m going to tell you. There’s sometimes a fine line between a spoiler and a warning, though, and I’m going to walk it now, so if for some reason you really want to see Eagle Eye knowing nothing about it, read no further. If you’re the cautious sort, though, and want to know what you’re wading into, here’s the warning: it’s a computer. The disembodied female voice belongs to a computer, and yes, that’s as much of a letdown in the movie as it is here. It’s a computer that’s smart enough to control every electronic system in the country, but relies on a pair of amateur human beings to take care of some of the most complicated legwork. It’s a computer with an astounding capacity for killing... until the third act, when–as my pal T-Bone pointed out–it conveniently forgets how to kill. Not so our heroes though. They know perfectly well that the way to kill a computer is to smash it in it’s big, red, HAL-like eye. Because the most advanced computer in the world, naturally, has its processor inside its camera, just like all computers do. Right?

The movie’s basic premise is that all of the nation’s intelligence data is fed into HAL-9000, and like a latter-day J. Edgar Hoover, HAL uses it to run the country. HAL makes decisions on who lives or dies. And HAL has decided that one or more very important person(s) has to die, and starts running a vicious program to make that happen through a chain of Rube Goldberg-like events. Abuse of power and the hazards of trusting all intelligence and surveillance to one all-seeing entity is an interesting topic, but this particular computer, Eagle Eye, is such a lame villain that there’s no opportunity to explore those issues. Instead, the climax finds the computer frying circuits everywhere and spitting out deadly electrical charges (as computers are want to do) and the humans trying to bash its eye in. The preposterousness of the mechanical villain renders impossible any serious exploration of intelligence oversight. The movie seems to want to raise that age-old question "Who watches the watchmen?" but doesn’t have enough respect for the intelligence of its audience to do so, instead giving them some lame man-vs.-machine action and a hollow patriotic message (in speech form) delivered over the final montage.

It’s all so silly, though, that I wouldn’t describe Eagle Eye as a wasted night of entertainment. There’s fun in watching something so inane, and some of the car chases are entertaining, even if they’re filmed in that Transformers-style that renders it impossible to really tell what’s actually going on. Furthermore, despite its inanity, Eagle Eye is one slick production, and the actors are all game. The movie would probably prove more fun, though, in the comfort of your own home with a large supply of beer.
Posted by Tanner at 5:56 PM