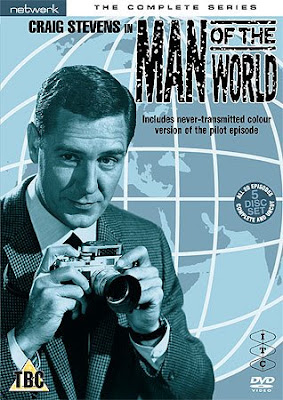 ITC Series Man Of The World Coming To DVD

Network is at it again. The company has announced the rarely-seen and highly sought after 1962 series Man of the World for release on Region 2 DVD this July in the UK. Man of the World stars Peter Gunn himself, Craig Stevens, as a hotshot photojournalist named Michael Strait whose assignments take him to exotic locales all over the world. Like other ITC adventure shows of the era like The Saint and The Baron, the photojournalist job is really just an excuse to get an "ordinary guy" into exotic places and into trouble. (Hey, it's more plausible than an antiques dealer getting involved in international intrigue, isn't it?) Also like those programs, that trouble often takes the form of espionage, and Strait gets caught up in various spy situations, all in the name of photojournalism. One of those spyish episodes, "The Sentimental Agent" even led to its own spinoff series of the same name. The spinoff series afforded Diana Rigg her first spy TV role and her first time speaking lines written by Brian Clemens. That episode, "A Very Desirable Plot," also guest-starred Burt Kwouk (a semi-regular on the series) and Donald Sutherland. I hope that Network's release of Man of the World might be an indication that the company will eventually get to The Sentimental Agent as well! Clemens also contributed scripts to Man of the World, along with other writers familiar to spy fans, like Tudor Gates and Michael Pertwee. This Network release also includes a rare, never broadcast color version of the pilot, "Masquerade in Spain." The episode was actually shot in 35mm on location in Spain, and not on an Elstree backlot!
Another recently announced Network title is only tangentially spy-related, but will certainly be of interest to John Barry fans: the company will put out The Cool Mikado on DVD in July as well. This Michael Winner film updated the Gilbert & Sullivan opera to the Swinging Sixties, and Barry adapted the music accordingly. Much of the music is performed by The John Barry Seven as well.
Posted by Tanner at 11:02 AM