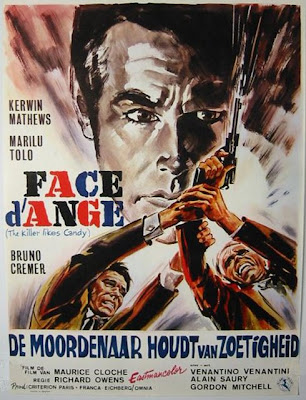 Code Red (I think it’s Code Red, at least; they’re logo is on the box, although the Media Blasters one comes up when you put in the disc) recently began issuing three-film DVD box sets of obscure movies under their Rare Flix banner. These sets retail at Best Buy and other stores for around $15.00, making them great bargains. And using this model, the company has managed to sneak out a couple of Eurospy titles, including a fantastic widescreen transfer of Lightning Bolt (in Volume 4) and a slightly-less-fantastic-but-equally-welcomed fullscreen version of The Killer Likes Candy in the second volume. 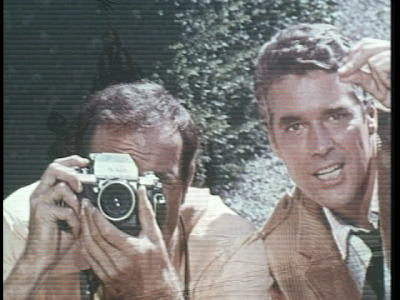 The Killer Likes Candy is somewhat of an odd bird in the Eurospy genre, but it’s still not to be missed. Two-time OSS 117 star Kerwin Matthews essays the part of CIA agent Mark Stone, for some reason christened with the nickname "Angel Face." (Fortunately, no one really calls him that after the first reel.) When we meet Stone, he’s posing as a fashion photographer, which affords the film an opportunity for some truly gratuitous groovy shots of bikini babes posing around a fountain as Stone directs them by throwing his arms up in the air in his best imitation of David Hemmings. These shots lead us to believe we’re in for the typical Eurospy parade of pulchritude, but other than one glaring example later on, the film is largely devoid of this and other cliches of the genre. There’s no globetrotting (although local Roman scenery is used to excellent effect), there are no gadgets, no kidnapped professors, no stolen microfilm, no boss’s offices with curtains for walls... none of that. But there is a comic relief Itialian sidekick, Costa (played by Venantino Venantini of The Beast In Space), who lightens things up considerably. 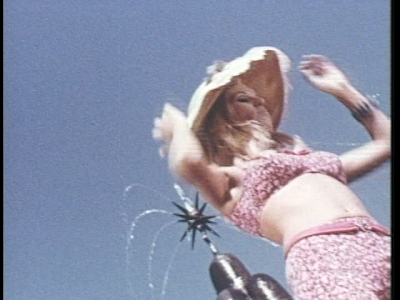 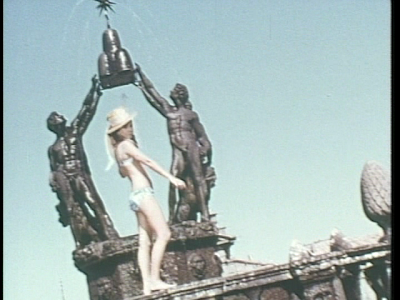 Stone’s mission is simple: he must protect the visiting king of oil-rich Kafiristan for the duration of his stay in Rome, because the king will grant the United States vital oil concessions. That simple task is made considerably more difficult, however, because there is a top assassin out to ensure that the king doesn't survive his trip! The ruthless killer (Bruno Cremer) does indeed like candy (and Stone even says as much*), but he doesn’t eat that much of it throughout the movie. Not as much as I was expecting, anyway, from that title. He’s not very hygienic about his candy consumption, either. Right off the bat he pets some filthy pigeons on the streets of Rome (why would anyone do that to begin with?) then–without washing his hands–shoves some sticky candy into his mouth with those very same hands. Eww! 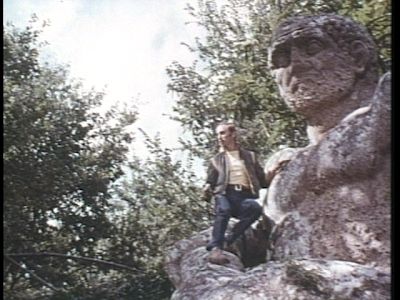 Based on the review in The Eurospy Guide, I was expecting The Killer Likes Candy to be a rather solemn affair. But it’s not. Despite the lack of regular Eurospy accoutrements, it’s actually a lot of fun. There are some great chases, and even some good comic relief moments. The best chase occurs on foot amidst some ancient, giant statues on the outskirts of Rome. (The Orsini Garden.) While Rome has been filmed again and again in Eurospy movies, this is a location I’d definitely never seen before, and it’s a cool one! The giant, lichen-covered statues look right out of Middle-earth. Stone and his pursuers leap off of them, scamper up them, hide behind them, and shoot them–all things I’m relatively sure that tourists are no longer allowed to do! It’s a great setting for an exciting shootout. 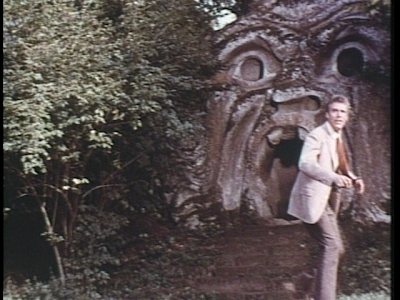 Matthews makes a good hero, more business-oriented–and likable–than most Eurospy leading men. He doesn’t waste time needlessly ogling ladies, he doesn’t spout cheesy pickup lines, and he doesn’t treat anyone in a particularly awful manner. He does find time for a roll in the hay (or rather, on the beach), but it’s with a woman who can better be described as a genuine "love interest" than most Eurospy window dressing babes. 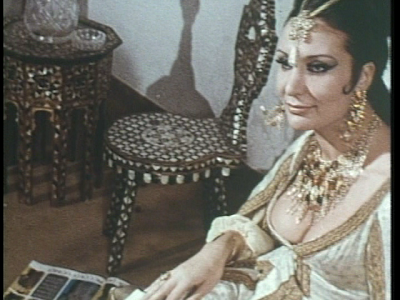 Luckily, all of the loathsome Eurospy traits are still to be found in the film; they’ve just been ascribed to the sidekick instead. In that one other moment of utterly gratuitous pulchritude, Stone and Costa open a forbidden door in the king’s hotel suite to discover his harem, all lounging around and dancing in various states of exotic undress. The Killer Likes Candy may not be chockablock full of beautiful girls, but I do like that it puts pretty much all the ones it does have in one place, and that you can just open up a door and find a room full of buxom beauties writhing about! Evidently Costa likes that too, and despite stern warnings not to he just has to take a picture! Costa takes any chance he can to chat up a beautiful nurse or masseuse, and when he can’t seal the deal, he works off his urges by exercising. This results in a few too many shots of a sweaty Venantini in his boxers, but overall it was a brilliant idea to make the sidekick the horndog jerk instead of the hero. Such traits–especially to such extremes–are funny, and it’s better to be laughing at the guy you’re supposed to be laughing at instead of the one you’re supposed to think is suave and cool! 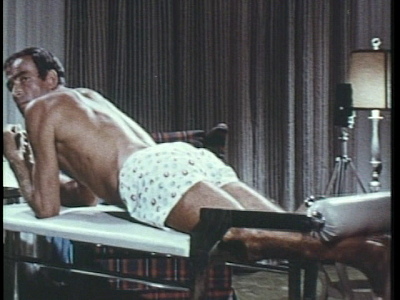 Other cool fights include one in a meatpacking plant and one where Stone is trapped in a warehouse, surrounded by bad guys (led by Gordon Mitchell from Fenomenal), and escapes by releasing a pile of barrels at them and rolling away in one of the barrels as they search behind the others! The final chase and shootout occur in some creepy, skeleton-filled catacombs underneath a church that lead out into a quarry, which a good place for a finale. There's also a sort of cable car running over the quarry, upgrading it to an excellent place for a finale! (Yes, there's a fight atop the cable car.) Along the way there’s a very tense moment with the king on an operating table, at death’s door. The effective scene generates true suspense over the fate of the king, the identity of a traitor and a crucial decision by one of the characters. All in all, there are a lot of good scenes in The Killer Likes Candy. Those, combined with great scenery, nice cars, a cool score by Gianni Marchetti with bits of male vocals going "bum bum bum" and even a snippet of the Bond Theme (subtly re-orchestrated at a slower tempo, on strings), and a really odd Fidel Castro cameo (for the sake of a joke) make it an easy recommendation for fans of the genre, even if it does eschew some of the regular Eurospy motifs. 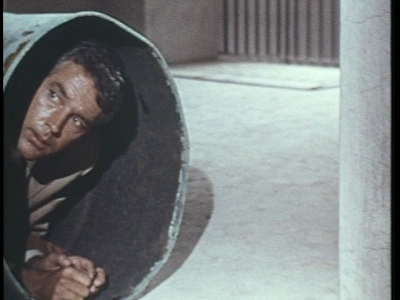 The Rare Flix DVD offers a particularly horrendous pan-and-scan job, full of sudden, jerky, aggressively noticeable pans. One assumes, though, that this panning and scanning was done long ago for a TV broadcast and not for the DVD, so one can hardly fault the company who do fans a real service by making this title available in any form. Besides the annoying pan-and-scan, though, it’s a decent enough transfer for a budget release. The other two titles that come in Rare Flix Vol. 2, Run Like Hell and Molly and the Ghost (both of a far more recent vintage) are unlikely to be of any interest at all to Eurospy fans. But that’s the beauty of the Rare Flix model. By bundling three disparate titles together, the company can afford to release a lot of obscure movies that probably wouldn’t merit any release on their own and even get them onto Best Buy shelves! By keeping the price point under $20, the set remains a bargain to fans of any film in there. Spy fans can get The Killer Likes Candy and rabid Robert Z'Dar fans can get Run Like Hell, and all anyone pays is the price of a single movie, but you get two more in the bargain. Everybody wins. Code Red (or Media Blasters) should be commended for this line, and I hope it does really well and they’re able to continue including other Eurospy titles in future packs. 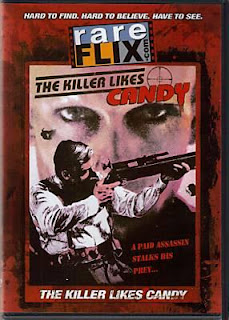 *I note this because I like it when awkward titles are shoehorned into spy movies. I call such lines "Walkens," after Christopher Walken’s memorable recitation of one of the most gratuitous awkward title insertions in spy movie history, when Grace Jones says to his character, Max Zorin, "Wow! What a view!" and he looks out of his blimp and replies "To a kill!" Stone’s line, "our killer likes candy," is far less conspicuous, but it’s still fun because of how ridiculous the title is to begin with!
Posted by Tanner at 1:53 PM