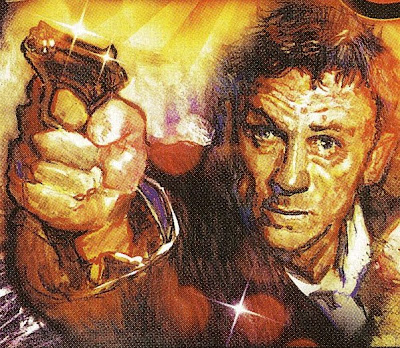 Cult-favorite comic book artist Bill Sienkiewicz, most famous for work on Elektra (but also responsible for an amazing run on The Shadow in the Eighties), has painted a montage of the year's nominated movies to advertise the Critics' Choice Awards, airing this Thursday. The ad runs in the current issue of Entertainment Weekly and serves as the back cover for today's Hollywood Reporter. Sharing space with Indiana Jones, Bruce Wayne, Clint Eastwood and others is James Bond! Since we no longer get painted movie posters, this kind of image (like Francesco Francavilla's retro-style poster) makes me very happy. Sienkiewicz may be best known to spy fans as the penciler of a few really cool, very espionage-heavy Black Widow mini-series a few years back, or for his DVD artwork for The Venture Brothers. He seems to have moved more into commercial art in recent years, and this image has me wishing he'd paint some movie posters! (Then again, I'm always longing for the days of painted posters, especially when it comes to James Bond.) The Daniel Craig pose is clearly based on a widely circulated publicity still, but I prefer Sienkiewicz's version. 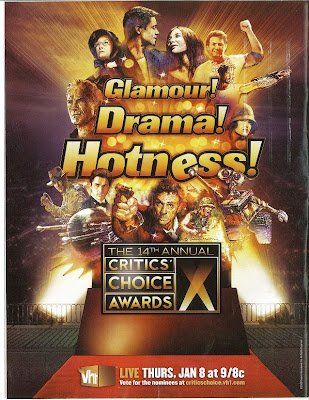 The art reminds me of Dave McKean's cover to the first time Titan reprinted the James Bond strip reprints.

Yeah, you're right. It does look a bit like that. It also looks a bit Struzany to me, which is kind of weird because Sienkiewicz's comic art is pretty far from that. Maybe it's just the colors.

And speaking of artists on the 80s DC Shadow, I always loved Kyle Baker's offbeat cover for Titan's old Spy Who Loved Me!

God, I hated that cover!

Daniel Craig is an unfortunate looking man.
Is this Bond era over yet?