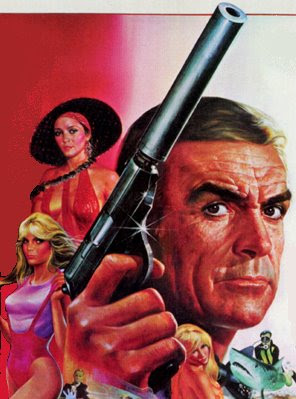 Well, wonders never cease! How things have changed in a few years. I remember asking an MGM Home Video rep if we'd ever see a Special Edition of Never Say Never Again back when the current, bare-bones DVD first came out... and being rather shocked by the vehemence with which he said we were lucky to have any DVD of that movie! He indicated that the producers of the legitimate Bond franchise would much rather see it disappear, and MGM obviously has good reason to want to keep the Broccolis happy. But clearly something's changed since then, as Fox Home Video (who distribute MGM product) announced today that the infamous rogue Bond film starring Sean Connery will indeed see a Special Edition release (and even a Blu-Ray release!) on March 24, the same day that Quantum of Solace and the third wave of official James Bond Blu-Rays come out.
According to the press release, both the Blu-Ray and the DVD will include "commentary with director Irvin Kershner and James Bond historian Steven Jay Rubin, multiple featurettes, the theatrical trailer and photo gallery." I don't know, but I would assume that this means that Rubin is producing the special features, as he did with MGM's other recent rogue Bond DVD, Casino Royale '67. There's an absolutely fascinating story behind Never Say Never Again, so hopefully MGM actually allows it to be told on the featurettes! Those includes "The Big Gamble," "Sean is Back," and "The Girls of Never Say Never Again."
I know Never Say Never Again is a film that divides Bond fans, but personally I love it... so I'm really excited about this release! Especially that Kershner commentary.
Posted by Tanner at 11:53 PM

I've only seen this dreck once so it's about time I watch it again. I will probably buy it on Blu-ray so that maybe I'll enjoy it more this time.

The film's only redeeming quality is the inclusion of Felix Leiter.

I'm glad they are re-releasing it as I bought the previous version that is missing the "Bond, James Bond" scene.

While I am glad that Steven Rubin is doing the extras, it would've been interesting had Graham Rye or Robert Sellers had been involved, as both have written extensively about the behind the scenes goings on.

I'm really psyched to see this with commentary. The film itself has some over-designed 80s tones to it, and maybe winks too often to the audience, but I still love it.
-Jason
www.spyvibe.com

No matter what one thinks of the film, I'm certainly glad that we're getting a decent edition of it with some effort put into it. I want to be able to own the entire Bond library - official and unofficial, good and bad - in the best versions possible.

Righty, definitely give it another watch. While the film will never be among the best, it's got a lot of great elements, chief among them Barbara Carrera as Fatima Blush. Klaus Maria Brandauer is also wonderful as Max Largo - and seems like a forerunner of Dominic Green. And it's great to see Sean Connery and Pat Roach tearing up Shrublands, even if the sets reveal their plywood nature as the actors smash through them. I think the score is the movie's biggest detriment. With different music, I suspect it would play a lot better overall. Anyway, despite the score, I'm with Jason: I love it. It certainly rates higher than a few of the EON entries on my Bond list - including Quantum of Solace.

The documentary SHOULD be one of the most fascinating aspects of this release, even for people who hate the movie! I agree, Delmo, that it would be great to hear from Robert Sellers after his exhaustive and wonderful tome on the subject, but we don't know yet that he won't be included! Rubin's documentary on the '67 Casino Royale was quite good and included a wide variety of interviews, so anything's possible...

I'm relieved to discover that I'm not the only one who likes this movie...