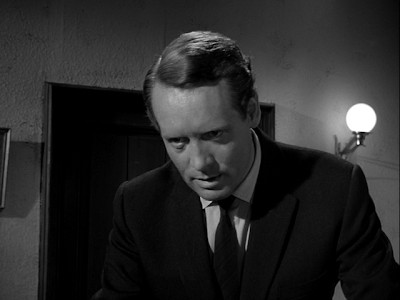 It's a very sad day in spy-world today. The Prisoner has been released. The Associated Press reports that Patrick McGoohan, star of the classic espionage series Danger Man (known in the U.S. as Secret Agent) and The Prisoner (as well as John Sturges' 1968 film of Ice Station Zebra) has died at the age of 80 following a brief illness.

McGoohan was a true titan of the genre. Along with Patrick Macnee and Roger Moore, he defined it in the early Sixties. Danger Man debuted in 1960, prior to The Avengers, The Saint, The Man From U.N.C.L.E., Mission: Impossible, Dr. No or any of the other big Sixties spy franchises. Thanks to his work in Danger Man, McGoohan was the first actor to become instantly identified with spying, which led to his being considered for both James Bond and Simon Templar when it came to casting those roles. The actor's deep personal faith (he was devoutly Catholic) ended up playing a big part in his career, and it became clear that his aversion to sex and guns on screen would rule him out for either role. Those same personal tastes combined to make John Drake, the titular Secret Agent, a fascinating character in the world of Sixties espionage. Unlike his popular colleagues, Drake rarely carried a gun and never took advantage of the various beautiful women he came across in the course of his career. McGoohan's own moral principals carried over to the character and enhanced it greatly.

While The Prisoner is rightfully regarded as one of the greatest TV series of all time, that distinction causes the show to unfairly eclipse Danger Man, which was a terrific program in its own right. Most of both the initial half-hour series and the subsequent hour-long one was shot in black and white, which seemed appropriate to the stories they told, which were often considerably more grim than those on The Saint or The Avengers. While Drake was undoubtedly a force of good, the lines were more blurred in his world than Simon Templar's.

McGoohan was never content to stay in front of the camera. After directing a few episodes of Danger Man, he went on to be the primary creative force behind the mind-bending The Prisoner, writing and directing many episodes (including the finale, "Fallout," which is as good a TV episode as we're ever likely to see) as well as starring. The Prisoner transcended its spy genre, not only in that it adopted some more sci-fi conventions, but more importantly in that it addressed serious themes of freedom (both personal and civic) and the role of the individual in society. The series is a masterpiece, and McGoohan will always be remembered for it. But that was by no means the entirety of the man's accomplishments.

Whether he was Number 6, John Drake or the Scarecrow of Romney Marsh, Patrick McGoohan brought a glowering intensity to every role he played. He's arresting on screen. You can't take your eyes off him. He combines a piercing gaze with a unique enunciation and carefully punctuated delivery to take absolute command of every scene he's in. That's why it was impossible to break the Prisoner. And that's why Patrick McGoohan will never be forgotten.

But he sure will be missed.

I always admired his volatile brilliance, intensity, and that great speaking voice. I never read up on his personal life, and that's fine; he was such an appealing enigma. Be seeing you, Patrick McGoohan.

I had just planned a McGoohan Weekend of watching Scarecrow and the Priz with a friend last night. Looks like it will be a memorial weekend.

My sadness is tempered by his longevity, and the mark he made on the world. RIP Patrick.

I never got into either Danger Man or The Prisoner but I loved McGoohan on Columbo.

McGoohan's voice can cut through any background noise. Powerfully watchable, totally unique - I wished he had lived to turn a cameo in Nolan's vision for the concept.