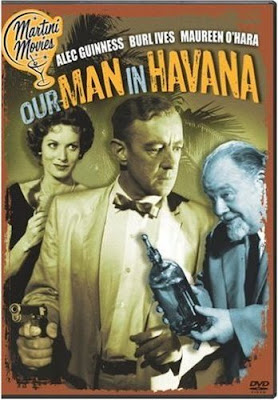 As with The Anderson Tapes starring Sean Connery, another Sony “Martini Movie” release has gotten by me until the last minute. They really need to do a better job promoting these waves! Anyway, Our Man In Havana, the comedic 1960 spy classic starring Alec Guinness and based on the novel by Graham Greene, makes its long overdue debut on Region 1 DVD next week, on February 3! This is one of the wrongly overlooked cornerstones of the genre (as well as the direct antecedent to John Le Carré’s The Tailor of Panama and John Boorman’s film of that book), and I’m so glad that that oversight will start to be rectified next Tuesday. This DVD belongs in any comprehensive spy movie collection, and I’m looking forward to adding it to my own!

In keeping with Sony’s other "Martini Movie" titles, extras are likely to be sparse (probably just a drink recipe), and retail is $19.94. (Although it's much cheaper at the usual online retailers, of course.)

Read my full movie review of Our Man In Havana here.
Posted by Tanner at 12:35 AM