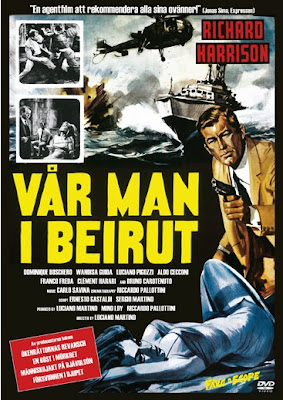 DiabolikDVD now has Fin de Siecle Media's brand new Swedish Region 2 DVD of Secret Agent Fireball (full review here) in stock. (It's listed as Spy Killers.) Secret Agent Fireball (aka The Spy Killers aka Operation Spy Killer aka Le spie uccidono a Beirut) is a highly sought-after Eurospy flick from 1965. It stars Richard Harrison (Ring Around the World) as secret agent Bob Fleming (see what they did there?), Agent X117 (and there?), co-stars Lightning Bolt's Wandisa Guida and boasts a script by future giallo maestros Ernesto Gastaldi and Sergio Martino (Torso, The Strange Vice of Mrs. Wardh). If you ask me, that's a heck of a pedigree! The film makes its worldwide DVD debut on this new Swedish disc which, according to the incredibly positive buzz on the Eurospy Forum, is beautifully remastered and presented in widescreen with English and Italian audio (and, unfortunately, non-removable Swedish subtitles). Secret Agent Fireball was followed by two sequels, Killers Are Challenged (1966, with Harrison reprising his role) and Fury In Marrakesh (also '66, with Stephen Forsyth, star of Mario Bava's Hatchet For the Honeymoon and co-composer of that unused, alternate Never Say Never Again theme song that Tim Lucas dug up last year). The latter is also due out on DVD from Fin de Siecle later this year.
Americans with multi-region players can now easily order Secret Agent Fireball from DiabolikDVD for $24.99, or directly from Fin de Siecle in Sweden for just 129 kronar (which comes out to under $20 including shipping to the U.S.). I did the latter and had some trouble with the Paypal checkout, but ironed those problems out very smoothly with Fin de Siecle's helpful customer service team. When it arrives, naturally I'll be posting a review... but if you like Eurospy movies and you have the capability to play an R2 PAL disc, you might as well go ahead and order a copy! After all, it's crucial to support companies like Fin de Siecle and Dorado who strive to preserve these obscure Eurospy gems with pristine DVD transfers.