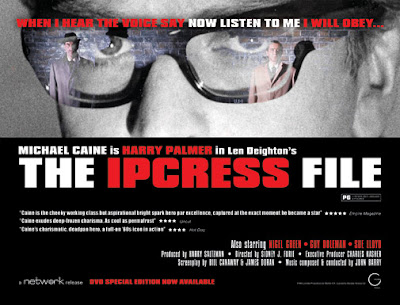 Network's "Deal of the Week" this week is a pretty good one! The British DVD company is offering their two-disc Special Edition of The Ipcress File (that's the Region 2 PAL one that comes with the Len Deighton book and the John Barry soundtrack CD as well as loads of special features) for the greatly reduced price of just £12.99... and bundled with a special, limited-edition quad poster from the film's 2006 British theatrical re-release! Sure, it's a couple bucks more than it was during their big clearance sale last week, but it's still a great bargain–and that poster's mighty nice! The poster will come shipped separately, rolled in a sturdy mailing tube. Among the many extra features included on the DVD are: an exclusive interview with Michael Caine, a new exclusive interview with the great production designer Ken Adam, an audio commentary with director Sidney Furie and editor Peter Hunt, some sort of "comedy sketch" starring Phil Cornwell (huh?), a 1969 documentary called "Candid Caine," featuring star Caine talking frankly about his career, the original theatrical trailer, US radio commercials, a stills gallery Len Deighton's original novel, the soundtrack CD by John Barry, a dual-sided mini movie poster (separate from the full-size quad you'll get with this offer) and an introductory booklet by the author of Michael Caine: A Class Act. Whew!
Remember, you need a DVD play capable of playing Region 2 PAL discs to play this.
Posted by Tanner at 7:31 PM