Lipstick Feminism: Gender Roles In Deadlier Than The Male (Or: When Is A Speargun Just A Speargun?)

My review of Deadlier Than the Male took a divergent turn at some point, and became more of a Film Studies paper than a movie review, so I excised those bits to post separately as their own article. It’s a movie that deserves more discussion than a single review, anyway. I’m sure this won’t be the last time I revisit it.

A beautiful, tranquil coastal villa in Northern Italy. A man catches up on some work outdoors, overlooking the water. Suddenly, its surface is broken–by two Venus de Milos, blonde and brunette (Elke Sommer and Sylva Koscina, respectively), rising out of it in tiny bikinis that show off their voluptuous bodies. They’re the perfect model of Sixties womanhood, but they’re carrying spear guns. The man has but a few moments to bask in their beauty, as they toy with him flirtatiously. Then they kill him. 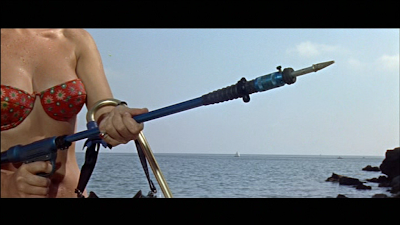 This scene (which you can see recreated in screenshots here) from Ralf Thomas’s 1967 spy film Deadlier Than the Male (produced by the prolific Betty Box, one of the only female producers working in British cinema at the time–and one of the hardest working producers in the business) combines two classic Bond Girl moments: Honey Rider’s famous introduction on the beach in Dr. No, and Domino’s killing of Largo with a speargun in Thunderball. In doing so, it successfully subverts the established Bond Girl formula, and sets a tone for generations of action heroines to follow. This isn’t the classic femme fatale of film noir, using her whiles to manipulate men, and perhaps turning their own pistol on them. No, this is a new type of deadly female for a more sexually liberated era. These women strut confidently forward, completely at ease with their sexuality, their femininity on full display, blatantly brandishing the most phallic weapon of all, a spear gun. Without missing a beat, they penetrate their male prey, establishing their dominance in a traditionally male arena: killing. Within the first reel, we’re shown just how apt the title is. From here on in, these women are in control. They won’t be seduced; they’ll be seducers. Richard Johnson’s Bulldog Drummond doesn’t defeat Sommer by conquering her; he ultimately defeats her by denying her. But I’m getting ahead of myself. It’s clear from the moment of their introductions that Sommer and Koscina are the forces to be reckoned with in this film.

Only after seeing the anti-heroines in action are we finally introduced to Drummond, in the middle of a karate bout. Tough, charming, and in possession of the same distinct brand of masculinity as Sean Connery, this is the man tasked nominally with solving these murders and, more crucially, re-establishing male dominance in a world controlled by women. The odds are stacked against him. The deadly females have struck the first blow, made the first impression. He’s fighting with his hands; they have spear guns!
Ultimately, Drummond can’t hope to defeat Sommer and Koscina. He’s relegated to a battle with the fey Nigel Green instead, and even then it’s an intellectual battle and not a physical one. The two men square off in a life-size chess duel. Not only is this an iconic Sixties spy setpiece (one thinks of Steed thrust into a life-size board game on The Avengers, or The Prisoner’s human chessboard), but by employing giant robotic pawns to do their fighting, it sidesteps the normally requisite contest of strength between the hero and archvillain at the end of any spy movie. That realm still belongs to the women. Sadly, we never get to see a confrontation between Drummond and the ladies. (Of course, that would have been impossible, because in the context of this world, he would have had to lose, and we simply can’t have the hero losing!) His only victory over them, as mentioned earlier, comes by following the female lead of Lysistrata and denying Sommer sex. (And how masculine is that?) As the dominant force in the film, the two women can only be done in by themselves, and that is exactly what happens.
Drummond saves the day (I hope I’m not ruining anything by revealing that), but male dominance never gets the chance to prevail. The battle of the sexes ends in a stalemate at best, but the road has been paved for a new breed of femme fatale, one as comfortable kicking ass as using her sexuality. While Emma Peel and Honey West blazed the way on TV, Sommer and Koscina did it on film, serving as direct antecedents to the women of Seventies revenge flicks, or, later, the Charlie’s Angels movies and Quentin Tarantino’s Kill Bill. 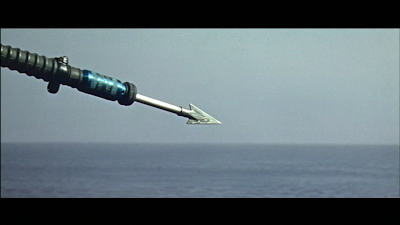 Thanks! Glad you liked it.

I actually kind of wished that Irma and Penelope could have survived, and gone on to star in their own series. I guess the production code and the mores of the time would not allow it. But, today, I suspect a series about a couple of beautiful bombshells going around whacking corporate CEO's would be very popular.