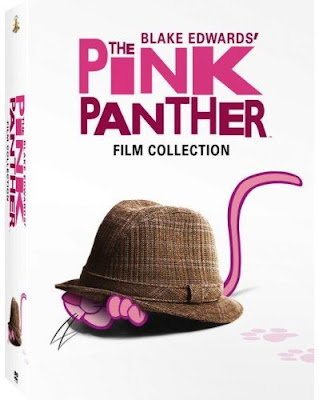 New Spy DVDs Out This Week: Panther, Panther And Patrick

The unstop-pable Pink Panther returns this week in several new iterations from MGM--this timed to coincide with Sony's newest Steve Martin movie bearing that brand name and coming hot on the heels of MGM's big holiday release The Pink Panther Ultimate Collection. That set collected all the original films (save of course for that pesky Return of the Pink Panther; since that one was financed by Lew Grade and ITC, it's never been a part of the MGM library and is currently available on DVD from Universal's Focus Features. Too bad, because it's one of the best in the series!), all the cartoons and the first Steve Martin version--plus a hardcover book on the series. And it cost a pretty penny. This week brings some smaller, more affordable combinations of the contents of that big set, and the Blu-Ray debut of Blake Edwards' original classic with Peter Sellers and David Niven. 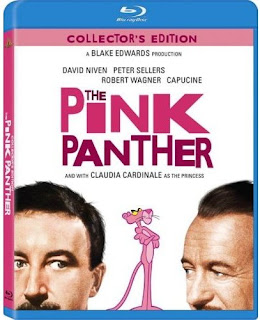 The Pink Panther Film Collection contains the Peter Sellers classics The Pink Panther (co-starring Niven, Capucine, Robert Wagner and the gorgeous Claudia Cardinale), A Shot In the Dark (co-starring Herbert Lom and Elke Sommer), The Pink Panther Strikes Again and Revenge of the Pink Panther. It's also got a number of attempts to extend the franchise beyond Sellers' death including Trail of the Pink Panther (cobbled together out of some genuinely hilarious Sellers outtakes from the other films hung on a shaky framing device involving New Avenger Joanna Lumley as an intrepid reporter), Curse of the Pink Panther (with Roger Moore cameoing surprisingly ably as Clouseau; he's still the most successful pretender to Sellers' un-fillable throne) and Son of the Pink Panther (starring Roberto Begnini, with Licence To Kill's Robert Davi as the baddie). That means all you're missing from the larger, movie-wise, are Alan Arkin's shot at the title role in Inspector Clouseau (1968) and Steve Martin's recent attempt. Both of those are available individually.

While The Pink Panther is a heist movie and A Shot in the Dark is a murder mystery, both of them exemplify the same widescreen Sixties glamor as the early Bond films. Furthermore, they export the same brand of British Imperialistic nostalgia as 007, despite featuring a bumbling French hero. All of the other Panther movies are really fairly legitimate spy flicks, owing more to the Bond genre than to any police movie. Clouseau may be an Inspector or Chief Inspector in the Sûreté, but his assignments often take him from Paris to exotic locations all around the world and require him to go undercover, don disguises and even use gadgets. The most gadget-laden affair is Inspector Clouseau (which is really a full-on Bond parody), but that one isn't included here. I'm sure that most Bond fans are well-versed in The Pink Panther as well, but if you're not, chances are you'd like the Sellers movies.

The first film is a new Special Edition version that includes the Blake Edwards commentary track, trailer and other documentaries available on the previous edition as well as the new featurettes "The Coolest Cat in Cortina: Robert Wagner," "The Tip Toe Life of a Cat Burglar: A Conversation with Former Jewel Thief Bill Mason" and "Diamonds: Beyond the Sparkle."

With a cover that nicely compliments the Film Collection, The Pink Panther Classic Cartoon Collection contains all six previously released discs of DePatie Freleng cartoons featuring the famous feline and his friends, as well as three others not available individually. While the original shorts did the occasional James Bond parody (the classic "Pinkfinger" comes readily to mind), my favorites have always been the "Inspector" cartoons. These are much more direct extensions of the film series, with an unnamed Clouseau squaring off against a variety of crooks, fiends and "mad bombeurs." Among the new discs is The Inspector, Volume 2, so there's even more of those antics to be found in this set than anywhere else. (Well, except that Ultimate set.)

The original film makes its debut on Blu-Ray this week, with all the same features as the Special Edition available in the boxsets. It and all the others are also reissued on standard DVD with cool new covers.

Patrick Macnee in Dead of Night

In this 1977 TV movie follow-up to Trilogy of Terror, Dark Shadows creator Dan Curtis directs three eerie yarns adapted by Richard Matheson. The middle one, "There's No Such Thing As A Vampire," stars The Avengers' Patrick Macnee in a Victorian tale of household vampirism.
Posted by Tanner at 2:59 PM