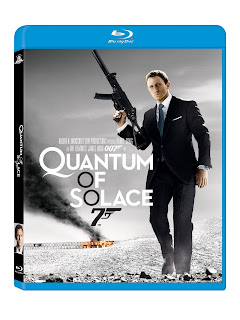 Fox Home Entertainment (and not Sony, as I would have expected) announced today that the latest James Bond film, Quantum of Solace, will hit DVD and Blu-Ray this spring. "The high-octane action of the world's most famous secret agent continues when QUANTUM OF SOLACE explodes onto Blu-ray Disc and DVD this March from MGM and Fox Home Entertainment," blares their press release. Dates vary internationally, but most hover around the U.S. release date of March 24, 2009. Australia gets it first (after being one of the last countries to open the film theatrically) a week earlier, and France and Switzerland have to wait until May. Japan (as the latest theatrical opening) brings up the rear with a June release.

Quantum of Solace will be available in single- and double-disc editions. The single-disc version includes the somewhat lacklustre music video for "Another Way to Die" and the film's awesome theatrical trailers; the two disc set includes all that and adds the following featurettes:

It's hard to tell how in-depth these features are by their titles, but just reading the list it sounds like more than the initial Casino Royale disc offered. (Still, I'm surprised more of the UK TV specials that aired around the film's opening aren't included. Was that "Bond on Location" a TV thing?) Seeing as there's no commentary track, though, I'd say it's a safe bet to expect a more thorough Special Edition down the road. In that department, I'm sorry that Sony has lost the license. They produced the best Bond DVD ever with their Casino Royale Collector's Edition, and Fox and MGM will have a tough act to follow!

Rejoice, Bond fans; your collections will once again be complete this March! (If you're as obsessive as I am, that brief window following each new theatrical release is a stressful time, knowing you don't have a complete collection...)
Posted by Tanner at 9:41 AM