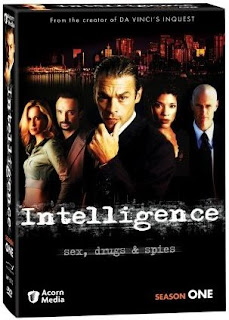 Let's ring in the New Year with another giveaway! In my Spy Fans' Holiday Shopping Guide, I mentioned a Canadian spy series called Intelligence that I've talked about before. It's relatively obscure to American audiences, but it's an engrossing, realistic series that plays like a cross between MI-5 and The Sopranos, following agents of Canada’s domestic service (and the criminals they’re spying on) as they attempt to form the nation’s first foreign spy agency. It's a spy show that focuses more on the backstabbing politics of an the Intelligence Community than on shootouts and action, like the earlier seasons of MI-5 or The Sandbaggers. Personally, I find that stuff often more interesting than the fieldwork. Intelligence deserves wider viewership, and to that end here's a chance for three lucky readers to win a set of Intelligence: Season One on DVD! Chances are this is a spy show you haven't seen yet. For a chance to win, simply send an email with the subject heading "INTELLIGENCE" including your name and mailing address to the Double O Section by midnight, Pacific Time on Thursday, January 8, 2008. Winners will be announced in one week's time, next Friday. Good luck!
One entry per person, please. Double entries will be disqualified. Three winners will be drawn at random and announced on Friday, January 9, 2008. Winners’ names will be posted here and they will be notified via email. All entries will be deleted immediately after the contest’s close, and no personal information will be retained or transmitted to any third parties. The contest is open to anyone, in any country, although this DVD is NTSC Region 1, so make sure that you have a compatible player. Unfortunately, the Double O Section cannot assume responsibility for items lost or damaged in transit.
Posted by Tanner at 1:54 PM