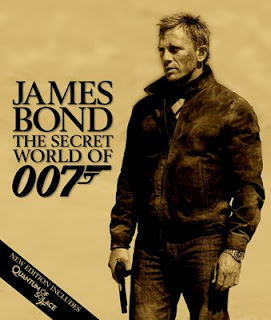 You’ve all seen this book, because it’s been around in one version or another for nearly a decade now. But with every new Bond movie, DK dutifully releases another updated edition, and what I’m reviewing here is the latest, the Third Edition, sporting the best cover yet: a gold-hued still of Daniel Craig from Quantum of Solace (naturally). If you’ve already got one of the other editions, then you know what to expect. This is a typical DK book; it’s packed with pictures on well laid-out pages overflowing with nuggets of copiously-illustrated facts about 007 and all of his missions. The overall conceit is that Bond and his world are real (there’s a forward by M explaining how all this can be declassified), and the book is clearly geared toward kids. In fact, it’s pretty much the best Bond book a kid could hope for, and I wish it was around when I was that age! 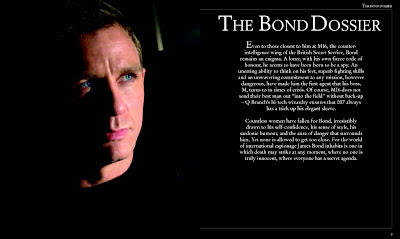 The new edition updates the picture of Judi Dench that accompanies M’s forward and replaces Brosnan with Craig on the "Bond Dossier" page in the front... but after that, it’s the same text and pictures that comprised the old version up through The World Is Not Enough. After sections on Bond’s weapons and fashions (still heavy on the Brosnan), girls, villains, allies and Q, we get to the heart of the book: four to ten page segments on each of the films–or "missions." The information comes–true to DK form–in beautifully laid-out two page spreads with lots of big photographs and illustrations (courtesy of Roger Stewart) and little chunks of text (by author Alistair Dougall or Consultant Editor Dave Worrall–a name well known to most Bond fans). Interestingly, these spreads generally avoid depicting Bond himself, giving the overall impression that Brosnan or maybe Craig participated in each adventure. 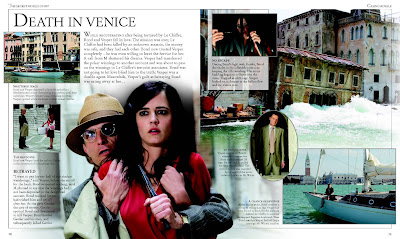 The book’s highlights are Stewart’s sprawling cutaway illustrations of vehicles and locations– like the Disco Volante, Atlantis, Piz Gloria and Drax’s space station–and large-scale photographs of Little Nellie, the Acrostar jet, Bond’s underwater Lotus and various Aston Martins detailed with pictures of their gadgets and inner-workings. I repeat: I would have loved this book as a kid! (The James Bond Fact File came close back in those days–but not in such style.) Some of the cutaways require creative extrapolation from what we actually see in the movies. For example, the book details the components of Dr. No’s prosthetic hands and reveals the geography of Scaramanga’s funhouse, something which is difficult to get a handle on in the film. Other two-page spreads detail spectacular chases or battles in Where’s Waldo-like levels of detail. My favorites covered the Aston Martin chase in The Living Daylights and the volcano battle in You Only Live Twice. 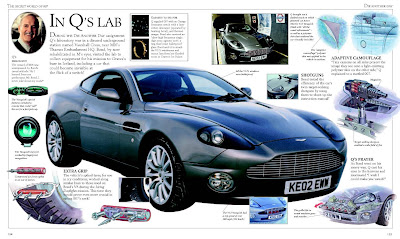 The chapters on Die Another Day and Casino Royale warrant more pages (as each one was added to sell another edition of the book), but ultimately less rewarding content. Apparently Stewart didn’t return (other than for some nice details of the Vanquish’s gadgets), so instead of his neat illustrations, we’re treated to familiar publicity stills and occasional production art. There’s also less information available on the new films, as their sections were probably written before the authors even had a chance to see them, perhaps based only on synopses provided by EON. Quantum of Solace only gets four pages (probably all the stills DK had access to at press time), and the descriptions are fairly obtuse, giving few details on what happens in the film. (Try this for ambiguity: "Bond’s journey through a labyrinth of evil led by wicked twists and turns to an apartment in Moscow.") It’s frankly odd to see the more adult-oriented Craig films broken down into DK’s kid-friendly layouts with headings like "Minefield of Treachery" and "To the Limit!" Still, I suppose the pictures would be fun for a kid to look at, even if he or she hadn’t yet seen the film. 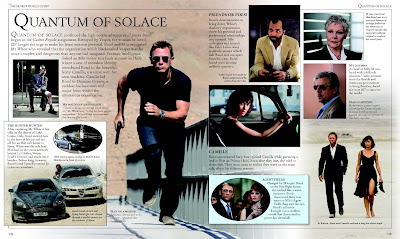 Honestly, there’s not much here (beneath the pretty surface, anyway) for seasoned, adult 007 fans. Those seeking a more in-depth, detailed and equally lavish take on the "Bond is real" conceit would be better served by the James Bond Encyclopedia, DK’s adult equivalent to Secret World. Those desiring actual behind-the-scenes information on the making of the films won’t find it in either place, and should turn instead to The James Bond Legacy. But for younger 007 fans, there’s never been a better book than James Bond: The Secret World of 007. If there’s a budding Bond aficionado in your life, this is the book for them! And if you’re like me and you just can’t manage to outgrow cutaway drawings of cars and bases and hovercraft, well then maybe it's for you, too...
Posted by Tanner at 11:50 PM