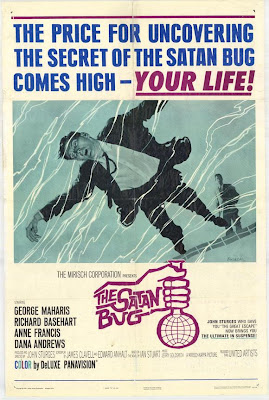 The Satan Bug has a good reputation and an excellent pedigree (written by James Clavell from a novel by Alistair Maclean, directed by John Sturges hot off The Great Escape), but ultimately it’s a convoluted, plodding affair without much to recommend in it.

The movie opens with a stiff, Joe Friday-type government agent in a hat landing in a helicopter at a top secret desert base called Station 3. Just back from Washington, he walks around and talks to enough other older men in suits and hats and lab coats that it starts to look like he might be our main character, which is not an appealing prospect. Fortunately, he’s abruptly murdered by some thieves who’ve pulled the old Trojan Horse trick and had themselves delivered into the secure top secret facility in crates. They make off with a deadly virus that’s been cultivated in the lab known as (you guessed it) "the Satan Bug" because it has the capacity to wipe out all life on earth and because there is supposedly no vaccine. Given this dire scenario, it’s clearly time to call in the real hero of the piece, former agent Lee Barrett.

We meet Barrett (Route 66's George Maharis) in a bongo club, which tips us off right away to the fact that he’s not like the Joe Friday guy who got killed. He’ s a different kind of secret agent, clearly more in touch with the counterculture. Consequently, he’s not real big on authority. "You rate rather high on insubordination," comments the official tasked with bringing this prodigal son back into the fold. Apparently, he’s been active in anti-war activities as well. "You’re quoted as saying that war had aged you so fast you were too old to play with toys," continues the serious-minded official. "Fired three months ago. Reason: emotional rejection of purpose of project." Sounds like the perfect guy for the job! The government man goes on to orchestrate a pretty neat trick in order to test Barrett’s loyalty, which he passes with flying colors. Evidently, he is the right man for the job.

It doesn’t take long for Barrett to get back to Station 3, whose security he was apparently once responsible for. He may not approve of what they’re doing there (cultivating viruses for germ warfare), but he definitely doesn’t want any of that stuff out in the world and in the hands of crackpots. After lots and lots of exchanging of names between more old white guys in hats ("You know Mr. Kavanaugh? Mr. Barrett?" etc.), Barrett conducts a thorough investigation of the crime scene and determines with Sherlock Holmes-like deductive reasoning how it all went down. (The movie is at its best when Barrett demonstrates his cleverness.) He then risks his life to discover exactly what’s been stolen, and confirms everyone’s worst fears: the Satan Bug.

At this point, Anne Francis lures him away from the base to a nearby resort... but only, it turns out, to put him in touch with her father, the general in command of the germ warfare project (played by Dana Andrews). Of course, Francis and Maharis clearly have a past together. The general has received the usual sort of telegram from whoever was responsible for the break-in, claiming to have the virus and threatening a demonstration to show they mean business. Barrett spends some time recapping everything that he and we just learned at the base for the benefit of the general, and does all that name-dropping all over again rattling off the identities of all the characters in hats we’ve barely met. The general wants to know who’s responsible. "Take your pick," says Barrett. "The extreme Left, or the extreme Right." (Another one of those Men in Hats has his own theories on the subject: "A lunatic! With the kill of all times! It gives me the creeps. This whole operation gives me the creeps.") 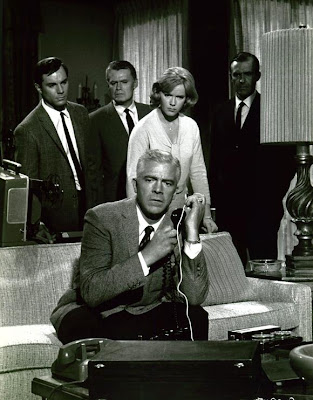 The bad guys’ threatened demonstration turns out to be quite harrowing, and the film’s most effective moment for its impact. They release the virus in Florida. The Men In Hats back at Station 3 watch aerial footage taken of the infected area, and see bodies everywhere: in the street, in truck cabs, in cars or just having stumbled out of cars, even on a cabin cruiser off the coast. It’s like the scene in Goldfinger with all the "dead" soldiers at Fort Knox, only these people don’t get back up again. Unfortunately, such a chilling scene ultimately seems out of place in The Satan Bug, because it isn’t dwelled on and before long we’re back to old white men in hats trading names and acting frustratingly stupid as to how they proceed, but with almost no concern for what’s happened in Florida.

Interestingly, the villains are operating out of candy-colored suburban tract homes, which makes a nice change of pace from Ken Adam lairs. They dress up like fishermen, which makes them almost as ridiculous as the fact that one of them is played by Ed Asner–who just can’t come off that menacing, even when armed with a vial of deadly virus.

Normally John Sturges is a master of handling a large cast of characters in a clear manner, but that skill fails him here. Of course, usually he has casts of very recognizable stars populating every role, which helps set them apart. Here, he’s working with a cast largely made up of TV actors and character actors. Old, white, virtually identical character actors. In hats. As a fan of hats in movies, I never thought I’d say it, but there are too many hats in this movie! While the indistinguishable old men in hats bicker about various courses of action (all of which seem to amount to doing nothing as Los Angeles is threatened as the next target), Barrett and Ann (yeah, that's her character's name, too, only without the "e") have been captured and spend a lot of time riding around the desert in vans and station wagons. This renders the hero pretty much impotent for a good chunk of the movie, while his bosses consider him so "unpredictable" that his absence doesn’t even alarm them to the danger. Besides, they’re too busy radioing their other men with helpful instructions like, "Stay put!" and "Don’t do anything!" Which gives you a pretty good idea of the speed with which the plot unfolds.

The bland settings don’t help The Satan Bug, either. If its not drab conference rooms, it’s sprawling desert. Not majestic Spaghetti Western desert, either: scrubby desert. Eventually, the action shifts via helicopter to Los Angeles, but it’s too little too late. The scenes of the city’s last-minute evacuation don’t ring true at all. While the freeways are predictably jammed, the surface streets are entirely empty of both cars and people. Somehow I don’t think a frantic evacuation would play out like that. Barrett struggles with the villain for control of both the virus and the out-of-control helicopter they’re flying in over the city, but all that comes too late to really enliven The Satan Bug too much.

Maharis makes a solid enough hero, but he’s kind of bland and his role doesn’t give him enough to do. His flashes of Sherlock Holmes-like deductive brilliance are his best moments, but they stop as soon as he gets taken prisoner halfway through the film. Anne Francis is criminally underused; she’s undeveloped as a love interest, and frustratingly ineffectual at anything else... especially for the woman who played Honey West! I should also mention that not one but two plot points hinge on cars breaking down. Granted, they’re all American cars, but those were supposed to be built to last back in 1965, weren’t they? Especially in dry desert conditions, I would think.

Ultimately, the movie plays out pretty passionlessly, as if no one involved really put their heart into it. It also plays as stupefyingly square for its time. It’s essentially a slow-moving 1950s drama about Men In Hats paralyzed with indecision when they should be doing something, but that simply won’t work in the post-James Bond world. 007 had already changed all the rules for this sort of adventure. Despite a hero who’s very carefully designed to seem "with it," The Satan Bug is simply too stodgy for its era.
Posted by Tanner at 7:09 PM

Funnily, I think I enjoyed this one more than you. I thought it was a solid, Hitchcock inspired thriller.

But the cast is it's weakest element!

I do love the Satan Bug. I waxed lyrical on it a while ago.

I thought this one might be controversial! I know quite a lot of people really like this movie, hence its good reputation. And Cinema Retro just praised it highly in their article about Maclean movies. (I think the author was Dean Brierly, if memory serves me, who occasionally comments here. Please feel free to jump in with youre opinion if you're reading, Dean!) Despite all that, though, it just didn't work for me. It may have caught me in a bad mood, but I was pretty bored by it most of the time.

You're right, David, that the cast is the weakest element, although Basehart was good (but I didn't want to talk about his character too much because it would get into spoilers). But I didn't particularly care for the direction either.

Thanks for the link to your review, MediumRob. It's good to read another point of view. And I do agree with you on the music--THAT was good!