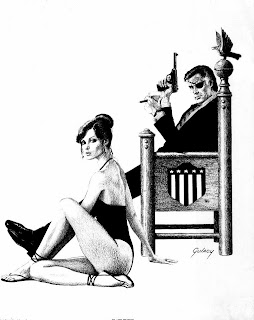 Variety reports that Devil Wears Prada actress Emily Blunt is in talks to play Marvel Comics' sexy, catsuit-wearing Russian superspy Black Widow (aka Natasha Romanoff) in Iron Man 2. I'm a huge fan of this character (I cherish my portfolio of mid-80s Paul Gulacy depictions of her), especially in her most recent solo series, which focused far more on her spy side than her superhero antics. For a while, Rebecca Romijn was rumored to be under consideration for the lead role in a Black Widow movie (at Lionsgate, I believe), but I guess this is now scuppered in favor of introducing the character in a supporting part in the Iron Man world. I like Blunt. As long as she looks good as a redhead and can pull off a convincing Russian accent, I think she could be good in the role.

Meanwhile, the Los Angeles Times is reporting that Marvel's other famous superspy, who made a cameo at the end of the first Iron Man, may not turn up in the sequel at all. Jackson, who was expected to reprise the role in a bigger part, told the paper, "There was a huge kind of negotiation that broke down. I don't know. Maybe I won't be Nick Fury. Maybe somebody else will be Nick Fury or maybe Nick Fury won't be in it." He implies that Marvel is being cheap, which sounds in keeping with the recent replacement of Terrence Howard with Don Cheadle, also supposedly after negotiations broke down. So here we go again with the whole "will or won't Sam Jackson be Nick Fury?" speculation that took many twists and turns leading up to the first Iron Man!

Is this all just a negotiating tactic on Jackson's part? Does Marvel want a younger Fury who could hold his own as an action hero in his own franchise? Do they plan to go back to the classic Steranko version of the character rather than the Jackson-inspired Ultimate version? Or is the character, as Jackson speculates, written out of the picture altogether? And, given the proximity of these two Marvel spy stories breaking, as the Hardy Boys would always wonder, "do you think there might be a connection?" Could it be that Fury's job of S.H.I.E.L.D. agent who unites the superhero team that will become The Avengers has been redistributed to Natasha Romanoff? Perhaps without Jackson, director John Favreau has simply decided to use another spy to recruit the heroes to S.H.I.E.L.D.'s cause?

Whatever the case, I certainly hope that a Black Widow appearance in Iron Man 2 at the very least leads Marvel to put out an Essential Black Widow collection of comics! 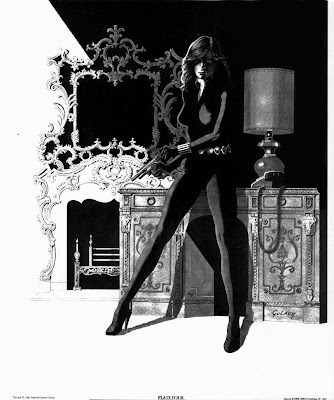 After his performance as The Octopus in The Spirit, Jackson should play Fury for free to make up for that.

Personally, I'd rather see the regular Nick Fury instead of the Ultimate version.

honestly i have to agree with Delmo, we've alreeady seen what sacrificing talent, and good fit for big names can do to movies and its said to say marvel has a long reputation with this.

I love the Black Widow, and would die for an essentials collection, and while i know there has to be plenty of material for it i wonder if i already have most of the issues they would include. hahaah. but seriously regardless of who they choose i hope its someone that would do each character justice.