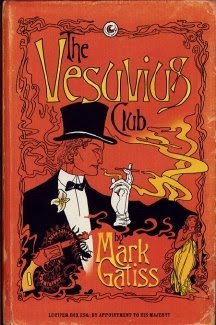 A cool-looking blog with the great name The Word Is Not Enough (though "word" appears to have become "medium," which is not as cool) reports that Mark Gatiss has revealed that the previously announced BBC adaptation of his first Lucifer Box novel The Vesuvius Club is now dead in the water. According to the Word (er, the Medium), "Mark Gatiss spent a year developing an adaptation of his novels with the Beeb. However, it's been abandoned because 'it went the way I thought it would and became more and more neutered.' So they live no more." Sad, but I can't say I didn't expect it. It seemed unlikely even in the age of Torchwood that the BBC would have allowed Gatiss to faithfully adapt his novel, in which bi-sexual Edwardian spy Lucifer Box takes on a demented transvestite bent on volcanic revenge with the aid of purple zombies. Since Gatiss has already adapted his book into one other medium, I assume the graphic novel gives us an idea of what might have been. But the novel is far superior.
I'd still love to see the Box stories filmed. Perhaps with the BBC deal lapsed, the door is open for a film version? I'd say the second book, The Devil In Amber, lends itself most readily to cinematic treatment. Still, it's sadly unlikely that any Hollywood studios will ever come knocking for a bi-sexual hero.
In the same report, though, the Medium has some good (if not spy-related) news about another upcoming Gatiss project: the author/actor/comedian has teamed up with Stephen Moffat to create a new Sherlock Holmes series called Sherlock. Not to be confused with the two Holmes movies currently in development, Gatiss' series plunks the famed detective, his associate Dr. Watson, housekeeper Mrs. Hudson and apartment at 221B Baker Street down in modern-day London. (Not via time travel or anything; they're now contemporary characters.) Gatiss says that they've taken inspiration from the Universal series of Basil Rathbone/Nigel Bruce movies, which contemporized Holmes in the war-torn 1940s. Benedict Cumberbatch plays Holmes and The Office's Martin Freeman plays Watson.
The press release says, "Sherlock is a thrilling, funny, fast paced take on the crime drama genre set in present day London." More insightful is a quote from Moffat, who proves he knows the right tone to go for by saying, "Other detectives have cases, Sherlock Holmes has adventures and that's what matters."
Gatiss adds, "The fact that Steven, myself and millions of others are still addicted to Conan Doyle's brilliant stories is testament to their indestructibility. They're as vital, lurid, thrilling and wonderful as they ever were. It's a dream come true to be making a new TV series and in Benedict and Martin we have the perfect Holmes and Watson for our time."
It's true; the modern setting sets off a few alarm bells. There's certainly room to go wrong. (I can't help but think of Steve Coogan's fake show Sherlock Holmes in Miami in Cruise of the Gods). But Gatiss is generally a guarantor of quality, so I have faith. I'm very excited for this!
Posted by Tanner at 2:43 PM

So, is Sherlock Holmes in the public domain? 3 projects in production at the same time?

My understanding from the way the trades reported the two movie versions is that permission is still required from the Doyle estate, but that they don't sign exclusive deals granting one studio the right to make movies at the exclusion of all others. People can pitch them projects and they either sign off on it or they don't. I also remember hearing the producers say on the Cruise of the Gods commentary track that they had to get the permission o the Doyle estate just to use Sherlock Holmes in their parodic TV series within a movie, Sherlock Holmes in Miami.

So I think it's just an increased interest for whatever reason among producers in the character--and I say it's about time! We haven't had a proper Holmes movie since the 80s, and those were more spinoffs like Young Sherlock Holmes and Without A Clue. And even TV has been just a trickle since Jeremy Brett died. (I liked Rupert Everett's take, though, and wish they'd do more of those. I was also dying to see the Stephen Fry/Hugh Laurie version that was announced just before Laurie committed to House, but I doubt that will ever happen now...)

Glad you liked the blog - yours is cool, too, particularly since you express a love for The Sandbaggers, I notice, which immediately makes you a person of extremely discerning taste.

FYI The Word is… is my personal blog since I'm a journalist; The Medium… is my media blog; and so on.

I do remember reading that the Doyle estate gave Paramount some crap over using Holmes in Next Gen without permission. After smoothing things over, they got permission for future Data as Holmes appearances.