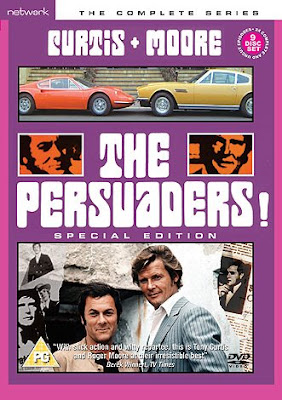 You know that awesome British DVD company, Network, that I was raving about only yesterday in my review of their excellent documentary The Saint Steps In... To Television? Well, today they announced a massive sale on their website that runs through January 25, with everything discounted by at least 40%, and often more! This includes their superb soundtrack CD sets as well as their feature-laden DVDs. The DVDs are PAL and mostly Region 2, so if you're not in Europe, be sure that you have the capabilities to play them. (Most people with a DVD drive on their computer and some free software do these days.) The Saint Steps In... To Television, for instance, is reduced from £11.06 ($16.29) to £5.10 ($7.51). For UK customers, the bargain is obvious. For US ones, consider that the current exchange rate is a reasonably favorable 1 GBP = 1.47 USD. That makes the disc just $10.80 including shipping to the United States! I swear, I don't work for Network and I'm not paid to shill for them... I just know a great DVD bargain when I see one and I can't shut up about it!
Among the many other spy-related bargains are:
Mister Jerico starring Patrick Macnee (review here) for only £4.59
The Bulldog Drummond Double Bill featuring both the sublime Deadlier Than the Male and its (somewhat lesser) sequel Some Girls Do plus special features for the unmissable price of £5.10. (If you consider yourself any sort of spy fan at all and you don't own this, then you can't afford not to buy it at this price! Absolutely essential.)
Michael Powell's Espionage for £5.10
The Ipcress File Special Edition (the two-disc one that comes with the Len Deighton book and the John Barry soundtrack CD as well as loads of special features) for just £10.21
The (unintentionally?) side-splitting adventures of the world's smarmiest spy, Gene Bradley, in The Adventurer for £12.76
The Sandbaggers: The Complete Series (the greatest "serious" spy show of all time, featuring a few extras not available on the US versions) for just £15.31--and individual seasons as low as £6.63
The Baron for £20.42
Return of the Saint (the most feature-laden version of this hard-to-find series in the world) for only £22.97
The Prisoner: Special Edition (remastered to the highest imaginable quality with loads and loads of unmissable special features not included on the US or Australian releases), The Persuaders! (bursting at the seams with mouthwatering extras), Danger Man, Department S, Jason King, and The Champions (all ditto) all for just £25.53 each (around 60% savings on some of those titles!)
Even their normally pricey Saint sets (The Complete Monochrome Series is a whopping 18 discs!) are drastically slashed by more than 50%! (Although The Saint is available in sets of varying quality in most countries, Network's is again the one with by far the most special features.)
Also on sale, in addition to DVDs, are the company's many multi-disc ITC soundtrack sets (including The Prisoner, Department S, Man In A Suitcase and two volumes of Danger Man), most ranging from £10 to £15!
When one of the world's largest distributors of spy DVDs has a sale like this, it's an event not to be missed! What are you waiting for? Start bargain-hunting! (That's what I've been doing all night long.) Be warned, though, that the site has been acting really weird all day due to the high volume of traffic the sale's attracted. Hopefully they have that straightened out by now. Also, I sometimes found that I ended up with an even lower price than the one listed after I put an item into my cart. Weirdness.
Posted by Tanner at 1:55 AM

Thanks to your posts I have just spent a small fortune at Network...

Thanks for the heads up.