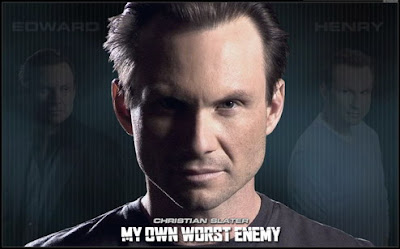 According to TVShowsOnDVD, Universal has announced that this fall's short-lived Christian Slater spy series My Own Worst Enemy will come to DVD on April 21. All nine episodes will be included on two discs. Artwork and extras (if any) aren't available, but retail is only $29.98. The series was a sort of "Dr. Jeckyl and Mr. Bourne," with Slater playing a mild-mannered family man called Henry who doesn't realize that he has a secret superspy alter-ego named Edward. I never saw it, but I heard some good things about the pilot, despite those obnoxiously on-the-nose names...
Posted by Tanner at 2:00 PM

I don't know if you followed my sparse comments on the show, but I found it to be an interesting premise with a gaping plot hole. Perhaps it would have been addressed in the future, but I gave up on it as soon as I learned of cancellation.