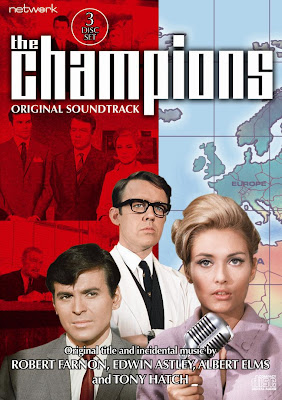 As I mentioned briefly in my article about their upcoming DVD set of Espionage, UK distributor Network continues their superb releases of soundtracks to classic Sixties ITC series in March with The Champions! The three-disc set includes original music by Prisoner and Danger Man veterans like Robert Farnon, Edwin Astley, Albert Elms and Tony Hatch. The Champions was a 1968 series in the Avengers mold about a trio of secret agents imbued with superpowers by an Eastern mystic when their plane crash-landed in the Himalayas. Okay, so it's very 1968, but it's a pretty awesome show. It starred Stuart Damon, William Gaunt and the drop-dead gorgeous Alexandra Bastedo (Casino Royale '67). Half of the episodes are available on Region 1 DVD from A&E in the United States; all of them are available in a features-laden Region 2 set from Network in the United Kingdom. As has been widely covered here, there is a movie remake in development originated by Guillermo Del Toro. Tom Cruise is tentatively attached to star. Should that movie go forward, I have assurances from A&E that they would release the rest of the episodes.

Network's soundtrack set (and this series had some great music) will be available in March as a web exclusive. There's no listing for it yet on their site, but look for it soon! I also have it on good authority that we can look forward to some more oft-requested ITC soundtracks from Network before the year's out (think halos)... and that I may even get my frequently-stated wish in the form of a Persuaders! set!
Posted by Tanner at 1:34 PM

It's like they're getting every ITC series' soundtrack out there, while I still wring my hands in anticipation for an eventual "Persuaders!" soundtrack release!

Hopefully I will be employed by the time the "halos" and Persuaders! soundtracks are released.

That image you have up-are the colors correct?

Thanks for pointing that out, Delmo. I'm not sure why it inverted on upload. I'll be able to fix it when I'm at home.

Cool! As I've mentioned, Network is kind of like the Criterion Collection for tv spy fans :) I can't wait to check this out. -Jason (Spy Vibe)

Yeah, they sure are, Jason. I wish they operated in the USA!

I loved The Champions. I wrote a great big essay on it a while ago in an attempt to get people to watch the repeats.

Wish Network would wake up about getting review copies of its stuff to me. It's like getting blood out of a stone.