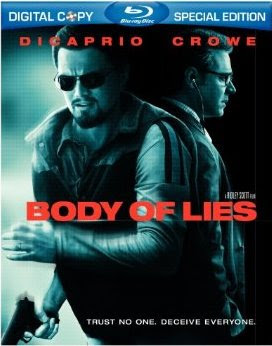 New Spy DVDs Out This Week: Body Of Lies

The only major new spy release this week on DVD is last fall's Ridley Scott thriller Body of Lies. This is actually the rare spy movie that I never got around to seeing in the theater, so I'm looking forward to checking it out on DVD. Leonardo DiCaprio and Scott's ubiquitous collaborator Russell Crowe star as a CIA field agent in the Middle East and his manipulative Langley handler, respectively. Body of Lies is available from Warner Home Entertainment in single-disc, double-disc (with that annoying "Digital Copy" thing that just won't go away) and Blu-Ray configurations. The two-disc version comes with a making-of documentary and some other features, and the Blu-Ray offers even more features, including a commentary and some sort of picture-in-picture documentary; the single-disc one is bare-bones.
Posted by Tanner at 3:17 PM