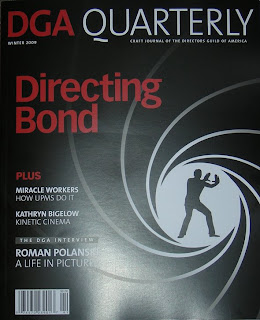 The Winter 2009 issue of DGA QUARTERLY, the official magazine of the Directors Guild of America, has a great cover story by Steve Pond on "Directing Bond." The description of the story in the table of contents reads: "the eight surviving directors of the longest-running franchise in film history reminisce about their adventures making James Bond come to life." The article includes some choice quotes from all the directors involved. Michael Apted reveals that a test screening at which the audience indicated that they were disappointed that his film didn't have a bigger pre-credits action sequence caused him to shift the credits to later, after the boat chase, thus creating the longest pre-credits sequence in the history of the franchise. Marc Forster says that he thought it was important that most of his creative team had not worked on previous Bonds in order to bring a fresher approach and that gadgets are not interesting to him, "because the gadgetry reminds me more of comic superheroes." And John Glenn reminisces about working on Bond films in the pre-CGI days, noting that "all the techniques we used, I'm sure they were available in Buster Keaton's day." There are a lot more good bits! It's definitely worth picking up the issue, which is on newsstands now with an eight dollar cover price.
Posted by Tanner at 9:14 PM