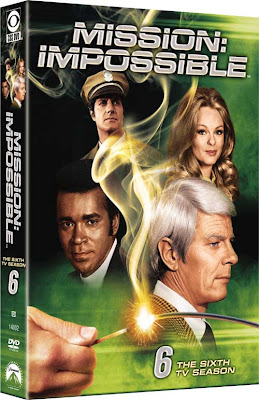 Honestly, I was getting a little bit worried that this hadn't been announced yet! But, luckily, my fears were for naught; Paramount has announced the sixth season of Mission: Impossible for DVD release this April, following the previously established twice-yearly schedule, according to TVShowsOnDVD. It's a green cover this time, as the team is reduced to four and Linda Day George joins the cast, replacing the departing Lesley Ann Warren. Leonard Nimoy and Sam Elliot didn't return for this season, either, resulting in a pared-down IMF to take on a parade of gangsters, thieves, corrupt politicians and other domestic threats. Season Six also features notable guest stars like William Shatner (pity he missed Nimoy), Billy Dee Williams and–in a rare instance of the ITC talent pool crossing over with the American TV talent pool–The Baron himself, Steve Forrest. If the release cycle continues as it has in the past, this means that we should see the finale season of the show's original incarnation in stores this fall. And then, I really, really hope Paramount continues with the 1980s revival version!
Posted by Tanner at 12:47 PM

It is a shame Shatner wasn't a guest star during the time when Nimoy was a cast member. That would've been the 2nd time they worked together in a show that wasn't Star Trek. That occasion would have to wait until T.J.Hooker.

You forget: they were together on an episode of The Man From U.N.C.L.E.!

If you re-read my comment you'll see that I said "That would've been the 2nd time they worked together in a show that wasn't Star Trek." The first time was the Project:Strigas Affair. I didn't mention it because I figured that most people who read this blog probably already knew it.

Ah. I thought the "that occasion" you were referring to was the two of them working together on a show that wasn't Star Trek, but I see you meant "the 2nd time." My mistake.

I'm looking forward to this! Along with season three, the sixth season remains in my memory more than any of the other seasons. Lynda Day George was one hot dish and I'm also looking forward to the continued fashion degradation as the IMF battles "the syndicate." This season just oozes early seventies "charm"; I just hope they don't edit Barney's vocal of "(Sittin' On the) Dock of the Bay."

I know you'll do a bang-up job reviewing this!

I, too, can't help but enjoy the descent into the dregs of Seventies wardrobe. And... Barney singing "Dock of the Bay"??? Wow, I'm really looking forward to this one! I haven't seen that. Thanks, C.K.!