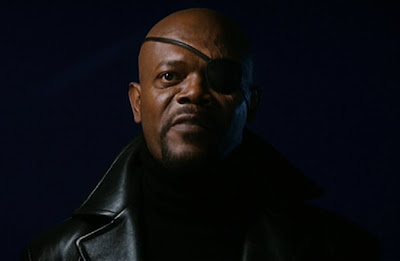 After a salary disagreement almost led to him not reprising his Iron Man role as Nick Fury, Samuel L. Jackson and Marvel Studios have kissed and made up. The Hollywood Reporter reveals that the sixty-year-old actor has just signed a deal to play the comic book superspy in nine more movies. That's right, a nine picture deal. As far as I know, such a thing is unprecedented. I'm reminded of Harrison Ford's answer when a reporter asked him at the press junket for Indiana Jones and the Temple of Doom if it was true he was committed to play the archaeologist in six films. "Not me," he quipped. "They must be talking to Roger Moore." But even Sir Roger never played James Bond nine times! Of course, many of those movies (including Iron Man 2, Thor, The Avengers [Marvel's version, mind you; no relation to Steed and Mrs. Peel] and Captain America: The First Avenger) might amount to just cameos. But the most interesting revelation in the trade is that "also on the table is the possibility of toplining a S.H.I.E.L.D. movie, which is in development." Hm. So the long-gestating Nick Fury movie has apparently morphed into a S.H.I.E.L.D. movie, presumably because they've now got a star attached too old to topline his own adventure. (Remember, such a movie would still be years away.) In the comics, ol' Nick keeps young by chugging something called Infinity Serum, but I don't think Mr. Jackson has any of that. It does seem a little bit insane to sign a sixty-year-old actor to a nine picture deal! The Hollywood Reporter's Risky Business blog (which offers further commentary on the deal) puts the eventual S.H.I.E.L.D. movie "sometime around the start of the first Sasha Obama administration."
Over the years, potential Nick Fury, Agent of S.H.I.E.L.D. movies have been set up at various studios, including Lionsgate and Paramount. Scripts have been written, but come to nothing. The closest thing to date is a 1998 Fox TV movie written by David Goyer and starring David Hasselhoff as the eyepatched agent. Jackson's Fury is based on the character as presented in Marvel's "Ultimate" line, which should be easy for the actor as Ultimate Nick Fury is based on Jackson!
Posted by Tanner at 12:24 PM

While I really like Samuel L. Jackson and am glad to see him sign this deal, I wonder why they went for an actor so old though.