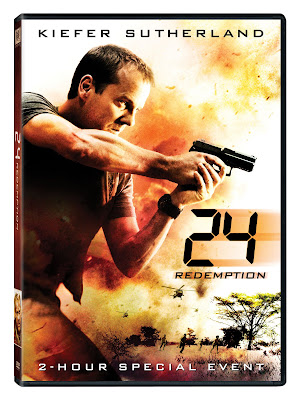 I had high hopes for both a fresh start to 24, and for a 24 TV movie removed from the dense continuity of a season. 24: Redemption, however, sadly failed to fulfill those hopes.

The best thing about 24 isn’t its real time gimmick; it’s the compelling lead character of Jack Bauer. And a lot of what makes Jack Bauer so compelling is that he’s a character driven by anger. I don’t blame him. I would be angry too if I had had six days in my life as rough as his six roughest days. The guy never gets any sleep. The weight of the world is always on his shoulders alone–not to mention the fate of Los Angeles! And his organization is riddled with moles. I don’t begrudge him his anger issues.

Redemption, however, begins with Jack well removed from LA, the city he’s saved so many times, taking refuge in Africa after traversing three continents to dodge a subpoena in the United States, where he’s wanted to appear before Congress for illegally detaining and torturing suspects. The notion of Jack’s constant-to-the-point-of-hilarious use of torture finally catching up with him is amusing on paper, but does anyone actually want to see five or six hours of real-time testimony before a Congressional subcommittee? No. That’s why 24 doesn’t air on C-span. And, frankly, I don’t really want to see Jack on the run from such a subpoena either. I want to see him raging against terrorists and traitors and yelling at the top of his lungs into his cell phone telling Chloe to open up a socket. Instead, we get Jack performing missionary work with orphaned children. 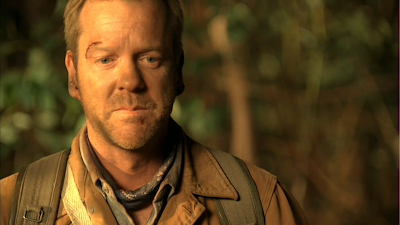 Jack is hiding out with his friend and former Special Ops colleague Carl Benton, played by The World Is Not Enough’s Robert Carlyle, looking exactly the same age he always has. Benton runs a UN-sanctioned orphanage in war-torn Sengala. Jack does handyman work around the place, and even occasionally interacts with the children. One particularly annoying little scamp named Willie seems to drive him to the edge of his rather short tether again and again (by rummaging through his stuff, stealing his knife and asking a lot of pesky questions about the past Jack would rather not face), but Jack wills himself not to get angry. When he does finally snap at the kid, he instantly feels bad and tries to slow his heart rate. This tranquility goes on for forty-three minutes of real time, nearly half the length of the 102-minute movie! It’s like watching an episode of The Incredible Hulk all about David Banner, where nothing ever sets him off! The writers throw lots of annoyances at Jack, like prissy French UN officials, stuffy American Embassy workers who want to serve him his papers and the aforementioned irritating little boy, but still Jack manages to keep his cool! I couldn’t. By the halfway point, we’re dying for Jack to snap into a Hulk-like rage and do some killing. In a whole season, you might have some time for mountain lion-related filler, but in under two hours there simply isn’t enough for so many shots of kids playing soccer!

Even the great Sean Callery, who’s scored every pulse-pounding minute of 24 to date (and whose seasonal soundtrack CDs generally make great driving music) is sapped by this uncomfortably peaceful Jack. He sadly can’t resist some predictably maudlin themes to underscore Jack’s missionary work–and bombastically sappy sounds to accompany the recruitment and brainwashing of child soldiers by evil nearby warlords. The music is usually one of the very best aspects of 24, but here it is noticeably lacking.

Anyway, forty-three minutes in said warlord (played by the always reliable Tony Todd, last seen on Chuck) finally sends his goons to recruit more soldiers from the orphanage. For some reason, his entire revolution (which is only minutes away from taking place) depends on having these twenty-some untrained kids swelling the ranks of his army. Of course, we all know he picked the wrong orphanage to mess with! 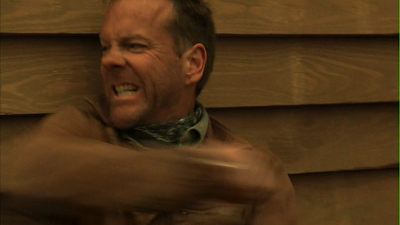 When the action finally kicks in, it’s great. Jack puts the UN peacenik Frenchie in his place by telling him, "I need you to go hide in the shelter with the other children" as the rebels fast approach the school. Then he hulks out, like we’ve been waiting for, and singlehandedly takes on several large troop transports’ worth of bad African soldiers. (These aren’t the child soldiers we’ve been led to believe comprise so much of their army, mind you; Jack Bauer only fights adults.) Jack fights with knife, pistol and assault rifle, killing scores of them. Then he gets caught and tortured, but being Jack Bauer refuses to break. And when he has the opportunity, he kills his tormentor too, and we all cheer. It’s the best sequence in this TV movie, and it’s ultimately all too brief.

Having saved the school, Jack needs to safely escort all the kids to the American Embassy to get them out of the country before the coup goes down and the warlord’s in charge. On top of that, one of the boys is injured, so they throw in one of those "If we don’t get him to the hospital soon, he’s going to go into shock!" situations to boot. Frenchie, meanwhile, has lived up to all the awful potential the writers hinted at by making him French and UN-affiliated and gone straight to the warlord and told him where Jack is going, so the warlord sends more men–including the vengeful brother of the torturer Jack slew–after them. It should have been really cool to see Jack guiding a busload of schoolkids across the African terrain while dodging heavily-armed rebels (a scenario also conjured in the first episode of The Equalizer, a show 24 co-creator Joel Surnow worked on in the Eighties)... but it’s really not. Too much time was spent with Jack being nice and the kids playing soccer earlier, so other than some rather contrived drama involving a landmine, not much happens. Jack’s daughter may have encountered a ferocious mountain lion the first time she ever set foot outside LA, but Jack sadly encounters no exotic and threatening African wildlife on his own trek. It's never clear exactly what part of Africa Sengala is in, but wouldn't it have been cool to see Jack take on a crocodile? Or anything else Tarzan ever had to deal with?

Meanwhile, back in America, we meet the new female President Elect (Cherry Jones). By my count she’s at least the sixth President we’ve had in just over six seasons of 24 so far. (Remember, David Palmer wasn’t yet President during the first season.) I know a few of them got killed or otherwise removed from office, but I think some were also meant to serve more than one term, maybe. If they at least averaged a term apiece, that makes it sixteen years so far since Day 1. Sure, Kiefer’s got some lines on his face, but he doesn’t look like he’s aged that much! Oh well. I realize how nitpicky it is to dwell on such matters. I don’t really care about it anyway; it’s just an interesting observation. 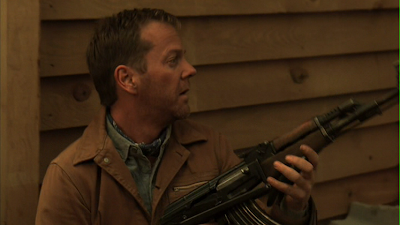 Anyway, I found the intrigue in Washington compelling, even if they’re just trotting out the usual 24 tropes of dodgy Secret Service agents, duplicitous advisers and Presidents’ family members mixed up in shady dealings that they shouldn’t be mixed up in. But none of this really belonged in something that’s billed as a standalone TV movie. None of the Washington plot threads introduced in Redemption are wrapped up; they’re all "to be continued" in Season 7. So they’re intriguing, but they don’t pay off.

Washington and Africa are brought together as the movie closes on a saccharine note, inter-cutting the new President’s inaugural speech about life, liberty and the pursuit of happiness with Jack’s desperate efforts to save the children. Granted, 24 has always been unapologetically heavy-handed, but this is still a bit much–especially coupled with more uncharacteristically obvious and cliched score music from the usually unimpeachable Callery.

24: Redemption has some good action in the middle, but ultimately plays out like an elongated episode of the TV show rather than a standalone movie–despite its more exotic setting, which it never takes full advantage of. And not one of the better episodes, either. One that’s full of kids playing soccer, and Jack acting like a monk instead of an assassin, to borrow a phrase from Daniel Craig.

Fox’s DVD of 24: Redemption is a two-disc affair, probably just to give the package a little weight. The first disc contains the "broadcast version" and the second disc the "extended version." Sure, there might be too much mellow Jack, but I can’t imagine anyone would choose the cut version.

Disc 2 also includes several special features, the most impressive of which being a 21-minute making-of featurette. It’s not just a fluff piece, either; it’s a legitimate, in-depth documentary. There are on-location interviews with producers, crew members and stars, backed up with ample behind-the-scenes footage of filming and not filming, waiting for bad weather to pass. Technicians discuss the differences in filming with an African crew, and how the new terrain affects their cameras, and the producers talk about how the change of location works dramatically. (They’re clearly very proud of shooting in Africa, so it’s too bad that the finished product didn’t take better advantage of the location.) The centerpiece of the documentary is a very good segment with the producer explaining in detail all of the blocking called for in the big action scene at the orphanage. He goes through the whole setup, and his narration is cut together with great B-roll of Sutherland in action on set mixed with clips from the finished product. In keeping with the featurettes we’ve seen on the regular seasons of 24, this is a very good making-of. It’s so good, in fact–and so convincing–that watching it actually made me reconsider my opinion of the movie a little bit!

Less good is a self-congratulatory commentary track with Sutherland, director John Cassar and writer/producer Howard Gordon. They do mention that they’d already shot eight episodes of the seventh season before filming this "prequel" movie (and make the case that it worked to their advantage), but they don’t go into the notorious difficulties that plagued this movie and this season of 24. They’re more interested in saying what a good job each other did and using phrases like "the tapestry of Africa."

A short documentary co-produced by UNICEF and narrated by Kiefer Sutherland called "Blood Never Dry: Child Soldiers In Africa" features Carlos Bernard, Cherry Jones and other cast members reading powerful testimonials by actual African child soldiers. News footage of such children is mixed with talking head experts expounding on the subject. It’s a well-produced featurette, but its inclusion here (as much as I normally like this sort of DVD feature) makes the actual movie’s treatment of the subject seem even more trivialized.

Also included is a well-done "Season 6 in Four Minutes" recap and the first seventeen minutes of Season 7, which is fairly redundant now that the season is actually airing. (Those seventeen minutes, however, are impressively riveting, foretelling a better season than Redemption would suggest!)
Posted by Tanner at 11:22 AM