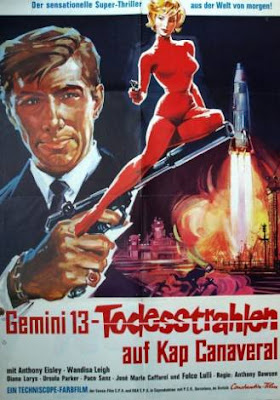 The excellent cult movie blog DVD Sleuth reports that Antonio Margheriti’s ridiculously fun 1966 Eurospy movie Lightning Bolt (aka Operation Goldman) will be released on DVD from Media Blasters as part of their next "Rare Flix" triple feature set. This is great news, as it's one of the better Eurospy entries and a movie that deserves a wider audience! The only downside is that it probably won't be widescreen, as previous "Rare Flix" releases have been in fullscreen only. Furthermore, the distributors don't seem to have much respect for the film. Their press release calls it "a spaghetti-spy film full of enough bad James Bond rip-offs to inspire a drinking game--and hilarious dubbing to match." So it seems doubtful that they'd put too much effort into remastering it or anything. But at least they're putting it out! For that, I'm grateful. The other movies included on the triple feature will be a Fred Williamson martial arts flick called Transformed and some sort of psychedelic grindhouse movie called Boogievision. I'm sure they're all well worth having! The disc hits stores April 24. Head over to DVD Sleuth to see the artwork.

Read my full review of Lightning Bolt here.
Posted by Tanner at 5:59 PM