Here’s another modern movie that fits all the criteria of the Eurospy genre–rugged agent, beautiful blonde, fantastic European locales and slam-bang action–but one of a slightly more respectable pedigree than Taken or the Transporter films. The International is a suspenseful thriller about a disgraced Scotland Yard detective turned agent for Interpol (Clive Owen) who teams up with the New York City District Attorney’s Office (in the very appealing form of Naomi Watts) to take down a powerful international bank that dabbles in arms dealing, assassination and revolution in their greed-fueled quest to control the debt that such ventures create. It’s directed by Tom Tykwer, the director of such myriad visual spectacles as Run Lola Run, Winter Sleepers and Perfume. The International is the most straightforward movie he’s ever done, but his touch is certainly felt in the arresting compositions and perfectly-constructed setpieces.

The movie opens with Agent Louis Salinger (Owen) witnessing the gruesome death of his partner. When he tries to save him, Salinger himself is cut down by traffic, resulting in a recurring ringing in his ear (that happens to poor Clive a lot in his movies). Salinger awakes in the hospital and immediately demands to see his partner’s body. Performing his own examination of the corpse, Salinger concludes that the man was poisoned by a minute prick to the back–despite the coroner’s official ruling of a heart attack. He makes his case to his boss back at Interpol headquarters in Lyon, France, and accuses the bank that they were investigating of the murder. When Salinger flies to Luxembourg to question the bank’s CEO, he instead encounters his smarmy lawyer (the British Office’s Patrick Baladi) and discovers that they’re one step ahead of him. Sure enough, he finds listening devices in his office, his flat and his boss’s house.

The only person he can trust is the New York prosecutor whose office first alerted Interpol to the case: Eleanor Whitman (Watts). The two of them pursue their investigation in Milan, Italy, where they’re once again awestruck by the bank’s capabilities, witnessing a political assassination orchestrated by the omnipresent financial institution. The assassination itself is wonderfully shot, utilizing the birds-eye view camera angles that Tykwer is so fond of to invoke Hitchcock–specifically the assassination sequence from Foreign Correspondent, also set in an exotic European city. It’s not the last Hitchcockian moment in The International, either. The entire movie appears to be something of a tribute to the master, although Tykwer is more subtle than other acolytes, like Brian De Palma. 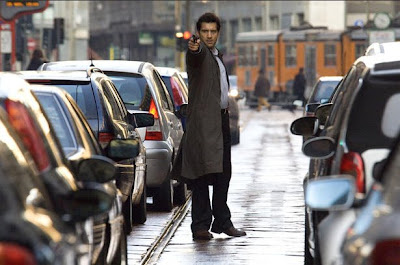 Salinger spots the assassin escaping by car and gives pursuit on foot in a thrilling chase. Further investigation earns the ire of local authorities, but leads Salinger and Whitman to her home base of New York City. It’s here that Tykwer stages the movie’s ultimate setpiece, a ten-minute-long shootout at the Guggenheim Museum between Salinger and a hit squad armed with submachine guns. Ever since watching Run Lola Run I’ve wanted to see how Tykwer staged a traditional action sequence, and the director doesn’t let me down. (I still think he’d be a great choice for Bond–much more appropriate than Marc Forster!) This is really one of the best shootouts ever filmed, and a terrific synthesis of location and scene. The building’s unique architecture also suits Tykwer’s style and favorite visual themes, allowing for plenty of shots of concentric white circles from above and below as Owen attempts to make his way down the museum’s famous spiral ramp, past the gunmen and out the door to safety. I'm surprised that this awesome location hasn't been used for such a scene before. The only other director to use it that comes immediately to mind is Matthew Barney, and The Cremaster Cycle is hardly comparable! I'm glad that the location has somehow eluded other action movies over the years, because Tykwer clearly makes it his own. 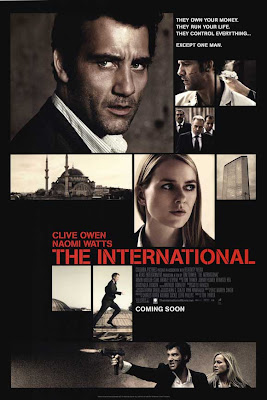 Despite this awesome gunfight, though, traditional action fans still might not get quite what they want out of The International–because it isn’t a traditional action film. Several superbly-staged sequences of intense action notwithstanding, this is overall a character-driven thriller–and a fairly talky one at times. And after the exaggerated scope of the museum shootout, things don’t get bigger, but smaller and more introspective. Those expecting a grand, Bondian finale to top that will be let down. Instead the scale diminishes, down to a mano-a-mano standoff between Salinger and the bank’s chairman, Jonas Skarssen, impeccably played by The World Is Not Enough’s Ulrich Thomsen (whose neo-Eurospy credits also include Hitman). That’s fine by me, though, especially since there are still more thrilling locations to fill the screen with ample eye candy–including what looks like the same Italian coastal road as featured in the pre-credits sequence of Quantum of Solace, only shot in a steady and confident manner that allows the viewer to actually view it.

The finale itself takes place in Istanbul, which instantly buys a film infinite good will on my part. From From Russia With Love to That Man In Istanbul to Fury On the Bosphorus, the city is a classic Eurospy location. Here, its crowded terra cotta rooftops (reminiscent of the Tangier sequence in The Bourne Ultimatum) and the unique sidewalk that runs along them provide the perfect setting for the film’s finale. 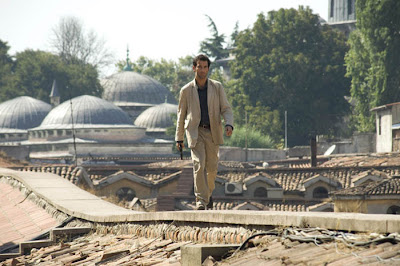 Ultimately, Tykwer is much more interested in Salinger’s journey as a character than in the mechanics of his thriller plot. (Another similarity to Hitchcock, who repeatedly stated that the "MacGuffins" that propelled the action in each of his films ultimately met nothing.) Like the rest of the film, the conclusion is character-driven. Again, it might not necessarily satisfy action fans thirsting for a crowning setpiece... but it aptly brings to a close the story Tykwer set out to tell–and does so in typical style. If you’re a fan of Clive Owen–who does a dependably fantastic job in yet another secret agent role–of Tykwer, of Eurospy movies, of Hitchcock movies or of exotic locales, you’ll find plenty to love in The International. And the title rings true; this is the best "travelogue" spy movie since The Bourne Ultimatum. I only wish the modern Bond films spent as much time soaking up their settings as The International does! Again, I reiterate my nomination for Tom Tykwer to direct a Bond movie. And I present The International–and particularly its stunning Guggenheim shootout–as Exhibit A in this case. 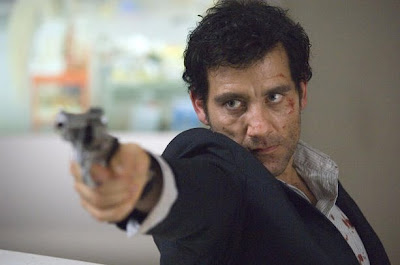 Saw the film opening day and thought it was very good. Your review was worth the wait.