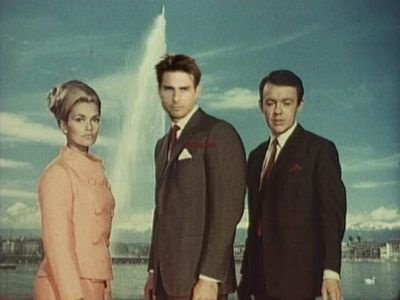 Variety today has an article that provides an overview of the many, many projects that Tom Cruise has attached himself to lately–most of them spy movies. Five different studios are trying to get the actor to commit to their films. While most of these have been covered previously on the Double O Section, the article does mention one new relevant project in which Cruise would play "an undercover agent who gets thrown together with a woman who has man trouble." That movie, Wichita, is being eyed as a possible team-up with Cameron Diaz. The article also recaps old information on The Matarese Circle and The Tourist, as well as mentioning Cruise's possible involvement with Motorcade (the Secret Service thriller written by Breach's Billy Ray). While the star is attached to all of them, he isn't yet firmly committed to any. The most interesting bit, however, pertains to the long-percolating bigscreen revival of the ITC cult classic The Champions:


Studios expect that Cruise will do two films this year, and while some questioned his enthusiasm for finding a big project, sources said that he will likely star next year in The Champions, a feature adaptation of the British TV series about a team of government agents rescued from a plane crash in the Himalayas by an advanced civilization and given superhuman abilities.

[Christopher] McQuarrie is writing that project, and producing it with Guillermo del Toro, who originated it with intentions to direct before he committed five years of his life to two Hobbit films for MGM and New Line.

Interesting! I'd speculated that Cruise's interest in The Matarese Circle precluded his involvement in The Champions, but apparently not. In fact, the Variety article makes that one sound like the closest to a sure thing! I've definitely come around on the idea. Cruise even looks appropriately like Stuart Damon. I'm very excited for that one, so I hope it happens!

Meanwhile, Daniel Craig's Defiance co-star and former Mr. Clark Liev Schreiber has come aboard a high-profile project famous for not starring Tom Cruise: Salt. Formerly titled Edwin A. Salt, Cruise had been attached to this project in the title role for quite a while. But he dropped out late last year only to be replaced by Angelina Jolie (which obviously necessitated a change in the character's first name and title). Variety reports that "Schreiber will play Salt's boss and friend on the Russian desk at the CIA." For those who haven't been paying attention, the trade also provides a nice recap: "The story centers on Evelyn Salt, a CIA officer who is fingered as a Russian sleeper spy. She eludes capture by superiors who are convinced she is out to assassinate the president. While trying to reunite with her family, she struggles to prove someone else is the traitor." Without knowing anything more than that (and therefore not in a position to provide any real spoilers–so don't worry and take this with a grain of, ahem, salt), I predict that Schreiber turns out to be the traitor!

Variety also reports that Warner Bros. has acquired North American distribution rights to Martin Campbell's bigscreen remake of Edge of Darkness. Campbell (Goldeneye, Casino Royale) directed the original British mini-series, which followed a detective (Bob Peck) getting caught up in a conspiracy involving the security services while investigating the death of his daughter, and he's also directing the movie, which stars Mel Gibson.
Posted by Tanner at 11:20 AM

My hope for The Champions, that didn't pan out for Mission Impossible, is that Cruise is able to play part of a larger, dynamic team that is greater than the sum of its parts. He often takes center stage, but these team-oriented shows really offer him a chance to be part of an ensemble. We'll see :)
-Jason (Spy Vibe)