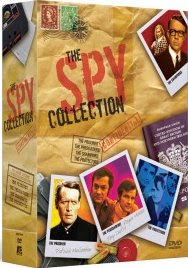 This week brings the perfect box set for American spy enthusiasts looking to dip their feet into the vast pool of ITC adventure series, eager to expand their cult TV horizons beyond The Avengers and The Saint. A&E's The Spy Collection Megaset features the first sets (of two total each) of The Protectors, starring the man from U.N.C.L.E. himself, Robert Vaughn, and The Persuaders!, starring Tony Curtis and an immediately pre-Bond Roger Moore, along with half of The Champions (the cult show about secret agents with superpowers that’s currently being remade for the big screen with a script by Guillermo Del Toro)–which is all that A&E has released of that show to date, unfortunately. In addition to all that, you also get a taste of the ultimate cult spy series, The Prisoner with the first two discs of the renowned Patrick McGoohan vehicle (amounting to just three episodes). The whole bundle is a tad pricey... but much cheaper than what the individual volumes of these series originally retailed for. It's really the ideal sampler for discovering the wonderful world of ITC series. And if you like what you see of The Prisoner or The Persuaders! (which you will) or The Protectors (which you might), you can still go out and buy the rest separately. If you like what you see of The Champions (which you will), well then you're kind of out of luck (at least until the movie gets made) because that's all that's available from A&E so far. But at least you'll have it all! If you've already got these, then obviously there's no reason to get this set. But if you don't... then, trust me, this the coolest release imaginable, and a must-have!
While that's the only major spy release out this week, as long as I'm talking about new discs I'm compelled to also point out that my favorite Dario Argento movie, the ultra-rare, previously near impossible to see Four Flies on Grey Velvet makes its American DVD debut today! There's nothing spy about it, but if you're into gialli, make sure you pick this one up. You won't regret it!
Posted by Tanner at 12:40 PM