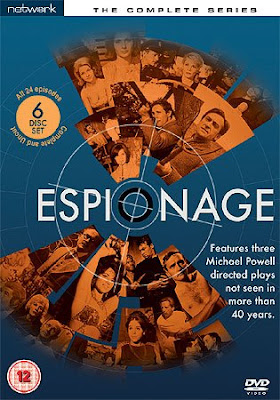 Quite literally, in fact! The UK DVD distributor extraordinaire will release The Complete Series of Espionage, the 1963-64 ITC anthology series. Network previously released a standalone disc containing the three episodes directed by Michael Powell (Peeping Tom, The Red Shoes). I picked that one up in their recent sale, but haven't had a chance to watch it yet. Even so, I'm excited about having the chance to see the entire series, which to the best of my knowledge was never re-broadcast and very difficult to see. Individual black and white episodes each told a completely different spy tale each week. They were set in all different eras, and ranged from light comedic depressingly ultra-gritty in tone. Settings ranged from London to Moscow to New York to Kenya. (According to Network, the New York episode even shot on location–a real rarity for ITC at the time!) Guest stars included Anthony Quayle, Donald Pleasence, Patrick Troughton and, strangely, Dennis Hopper. The six-disc set, containing all twenty-four episodes, will be available March 3 for £58.99 (but will be available for less, naturally, on Amazon and Network's own site). Extras include script PDFs and color still galleries.

Network's also got more espionage in store for March, including the previously announced Patrick McGoohan movie The Hard Way and a soundtrack set for The Champions! (More on that one soon... )
Posted by Tanner at 10:35 AM

I have to thank you again for alerting me to Network. Those guys do fantastic work- the Criterion Collection of UK cult TV :) I've received all of the McGoohan CD sets at this point and am blown away by the quality and detail of packaging and extras.

Now on to another fave topic of mine- Michael Powell! I'm really intrigued to see Espionage, his episodes especially. I hadn't heard of this show, so I'm psyched to check it out. -Jason (SpyVibe)

Wow! I just watched the Red Shoes the other day, which I think is one of the most beautiful movies ever made. I can't wait to see his take on spies!

Isn't that beautiful? Black Narcissus is also amazing. His espionage film Contraband (1940) is really worth seeing and has been released on Kino video. -Jason (Spy Vibe)