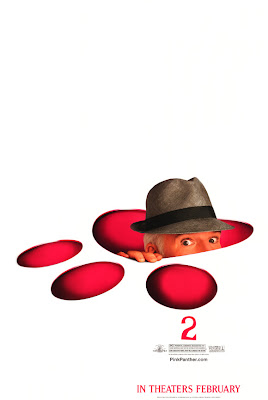 The really surprising thing about The Pink Panther 2 is that it’s not that bad. All things considered, that is.

Purists, stow your slings and arrows and hear me out. Of course it’s not on the level of the real Pink Panthers, the Peter Sellers/Blake Edwards collaborations. Of course not. How could it be? But the fact is that there have now just as many Pink Panther movies without Sellers as with him. (I’m splitting the difference with Trail; obviously it was made after Sellers was dead, but his presence in old footage still elevates the first half of that movie above most of what came after.) And, for better or for worse–and following in the shoes of Alan Arkin, Roger Moore and (to some extent) Roberto Begnini, Steve Martin is now the only pretender to the throne to actually essay the role of Inspector Clouseau on two occasions.

Martin is actually the biggest flaw in this new film, and that’s from an admittedly biased point of view. I just can’t shake Sellers’ definitive portrayal from my head, and he’s too different for me. Then again, I can see why he opted not to do a direct imitation. Martin doesn’t even imitate Sellers’ unique French accent (which Moore actually parroted rather perfectly); instead he creates his own version. And I find that jarring. As I say, I can see why the actor chose not to mimic Sellers, but the fact is everyone’s going to compare them already, so why not give the people what they expect? Oh well.

So we have a jarringly different Clouseau in the lead (one which seems to owe more to Sacha Baron Cohen's Borat than to Sellers), and beyond that, it’s a pretty funny movie. I found myself laughing quite a bit–which is also quite a bit more than I had honestly expected to. The Pink Panther 2 is certainly on par with Martin’s first go-round (which, granted, isn’t saying much), and to my mind a slight improvement, even.

John Cleese, for instance, is a marked improvement over Kevin Kline in filling the shoes of the great Herbert Lom as Chief Inspector Dreyfus. It’s the kind of role that Cleese can do in his sleep, but why fault a man for being perfect for his part? His first scene (opposite former James Bond Admiral Goeffrey Palmer) gives him the opportunity to perform his patented slow burn to hilarious effect. He even gets in a nice nod to Lom with the way he barks the word "Clouseau!" though he doesn’t affect Lom’s famous tic. Cleese doesn’t get a lot to do in this movie, but he elevates every scene he’s in. In fact, I kind of a little bit hope this movie does well enough to warrant a second sequel, just for the chance to see more of Cleese as Dreyfus!

There are actually quite a few references to the original series in this movie (which Martin’s first effort seemed to shy away from), and I enjoyed every one of them. At one point when Clouseau has been shot, Dreyfus says, "I wish I’d shot him," conjuring many memories of Lom attempting to do just that. And though Cato is still sadly absent, we do get to hear Clouseau mutter his famously inappropriate term of affection for his manservant, "my little yellow friend"–though this time to a Japanese detective. This leads to an amusing sequence in which Lily Tomlin’s "political correctness instructor" character tries to teach Clouseau why "we do not call Japanese people our little yellow friends."

Like its predecessors, The Pink Panther 2 plays more as a spy movie than a detective one, with Martin’s Clouseau (like Arkin's) showing a fondness for gadgets (whose use usually results in mayhem) and his case taking him out of the country to further-flung locations than Paris. The plot itself is partially recycled from the excellent Sellers effort Return of the Pink Panther, and I took this as another homage. The infamous cat burglar of the original series, The Phantom (originated by David Niven but ably played in that film by Christopher Plummer), is sadly–and somewhat inexplicably–replaced by in inferior substitute called "The Tornado." (Huh? Is that a good thing for a cat burglar to be compared to? Doesn’t it make more sense for him to disappear like a phantom than cause a ton of attention-calling racket and destruction like a tornado? Oh well.) French crooner Johnny Hallyday gets so few chances to demonstrate any Nivenian charm that we can’t really blame him so much as the script; fortunately Jeremy Irons is on hand to fill that urbane straight man role a little better.

The movie is refreshingly not just for kids, as the trailers would have had me believe; despite the PG rating there is a surprising amount of sexual innuendo (of a generally crasser variety than was in the Seller films, though) and even some killing. Of course, that’s not to say that it doesn’t also have plenty of the unabashedly childish humor that’s sustained the whole series from the very start, such as Clouseau interrogating the Pope in his chambers (you can imagine the results) and some good physical shtick reminiscent of Martin’s work in Father of the Bride as Clouseau sneaks around the grounds of Irons’ estate, his every move captured on closed circuit security cameras. 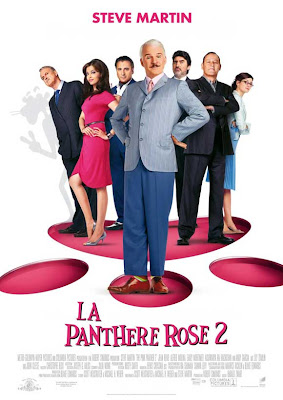 My point is that the movie is not as bad as you might think, and certainly not deserving of the drubbing its taking from the critics–not that it’s anything brilliant or anything on the level of the Sellers movies. Even in its funniest scenes, it elicits only chuckles, not the uncontrollable spasms of laughter that Sellers induces when he pretends to be a dentist or brings a powerful vacuum cleaner to sneak around a room with a parrot. But those chuckles were pleasant, and they were more than I was expecting. Still, I wouldn’t recommend going in with high expectations; this is by no means a great film.
The direction, for instance, is uniformly lackluster. None of the heists at the beginning have any of the pizazz of Blake Edwards’ best (like the fantastic opening of Return, played completely straight) and the jokes lack Edwards’ sure sense of comic timing. Set-ups that Edwards couldn’t have resisted are left unpaid-off. One problem carried over from Martin’s first Panther is that fact that, once again, Clouseau is too smart, making stunning deductions and solving crimes on his own. Sellers’ Clouseau always came out on top, but through sheer dumb luck–and often completely oblivious to the fact that he had solved the case. The new movie doesn’t even play fair in this department, either; all the clues Clouseau connects were off-screen and the audience never sees them. Then again, they’re not the least bit necessary for us to deduce anything; it’s obvious from the start who the culprit is!
But for all its flaws, it’s hard to be too critical of any movie that comes up with a hilarious spin on the old "bullet blocked by the thing around his neck" cliche. When Clouseau is shot, Emily Mortimer examines him, sees that the bullet has hit a medal around his neck and declares, "It’s impacted on his medal!"
Andy Garcia, playing an Italian detective, replies with the best line of the film: "Not exactly. It ricocheted off and killed the waiter."
Do you sense some ambivalence here? I know I'm sounding kind of wishy-washy, but this is the very definition of a mixed review. The best I can open with is that the movie "isn't that bad," and it isn't… but that fact came as a pleasant surprise to me. It's definitely better than it's getting credit for being. At the same time, it's far from great. I certainly can't give The Pink Panther 2 an unconditional recommendation, but if you, like me, are a fan of the franchise in general who finds something to like in every installment (even Inspector and Curse have their moments), then you'll probably find yourself laughing at this one as well–perhaps in spite of yourself.
Posted by Tanner at 8:03 PM