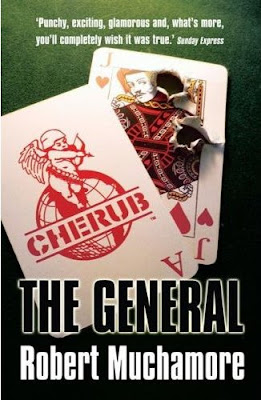 CHERUB Movie in the Works
According to The Hollywood Reporter, BBC Films announced at the Berlin Film Festival that it is developing a potential film franchise based on Robert Muchamore's popular "CHERUB" series of teen spy novels. I haven't read any of the CHERUB books, but Bish over at Bish's Beat speaks highly of them--and more teen spy movies is always a good thing in my book! The trade calls the series "more Bourne than Bond" and describes it as "a kids' actioner," asserting that "the movie will include skateboard chases and lots of action." Bish says the books are "very inventive and a more grounded version of the Alex Rider spy novels."
Hopefully the first CHERUB film (which will be based on the first book in the series, The Recruit) will fare better than the first Alex Rider movie, which undeservedly failed at the U.S. box office thanks to a non-campaign by The Weinstein Company that seemed designed to intentionally sink the film rather than sell it. (Really, do Harvey and Bob have some sort of Producers-like scheme going on where they benefit more from flops than successes? All of their films are unceremoniously dumped like this! See: this year's Outlander and Fanboys, among many others.)
Network Nabs Know
In other news out of the Berlin Film Festival, The Hollywood Reporter is reporting that my favorite UK DVD distributor, which apparently also handles theatrical releases over there, has landed "TV, theatrical and home entertainment rights" for a new spy thriller called I Know You Know. The movie, filmed in Wales, stars The World Is Not Enough's Robert Carlyle (bald and looking rather like the Scottish Vic Mackey) as "as a highly charged undercover agent." It's about the relationship between the agent and his son, and is apparently based on director Justin Kerrigan's real life relationship with his own father. It's produced by Sally Hibbin. (I wonder if that's the same Sally Hibbin who wrote The Official James Bond 007 Movie Book back in the late Eighties?)
Posted by Tanner at 9:08 PM

I am thinking of going down from San Francisco to the LA screening of Funeral in Berlin on Feb 21st (!) and thought I'd spread the word to see if people would like to meet up for a Spy Fan Summit. More info on Spy Vibe.