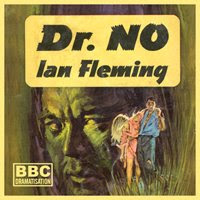 Dr. No Radio Adaptation At Permission To Kill

David Foster over at Permission To Kill has done all spy fans a huge favor by posting last year's specially commissioned BBC Radio adaptation of Ian Fleming's novel "Doctor No" in its entirety! Die Another Day villain Toby Stephens plays James Bond, and TV's Poirot David Suchet assays the title role. The radio play was originally aired as part of the Ian Fleming Centenary celebrations last year, through special permission of EON Productions, who control the character's radio rights. Hurry, though; the download is only available for a limited time. Now you don't happen to have that excellent "Ipcress File" adaptation that BBC Radio did a few years ago up your sleeve, do you, David...?
Posted by Tanner at 3:27 AM

I listened to it-I don't understand why Suchet decided to voice Dr.No in such a weird, gutteral way. It's been a while since I read the book and don't remember if his voice was described as such.