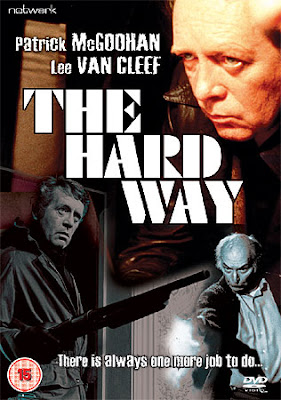 The UK's best and most prolific distributor of spy DVDs is at it again! Network has announced the 1979 Patrick McGoohan rarity The Hard Way for release on Region 2 DVD on February 18, 2009. In the dark TV movie The Hard Way, McGoohan (in between Silver Streak and Scanners) plays an Irish assassin named John Connor who wants out of the business. He tries to quit, but his controllers won't let him leave the game. Sound familiar? It's certainly a recurring theme in the actor's career. This time, however, instead of being whisked away to some mysterious Village, McGoohan's brooding character is pursued across Ireland by Lee Van Cleef. (Spaghetti Western fans my find it interesting to note that McGoohan worked with Van Cleef and Clint Eastwood, in Escape From Alcatraz, in the same year.) Extras include a trailer and a stills gallery. Network's website also points out that the movie features a score by Brian Eno–or rather ready-made selections from his sublime album Music For Films.
Posted by Tanner at 3:46 PM

A highly atmospheric film, with McGoohan perfect as a world-weary hit-man who's seen it all. This is not a one dimensional quick-fire action film, but there lies its considerable strengths - a measured pace and complimentary music score all contribute to a slow, layered build-up of tension. Most memorable.

I've been wanting to see this one- especially as a die-hard McGoohan fan. Once again, I have to thank you for alerting me to NETWORK- a fantastic resource. I was blown away by the depth and quality of their McGoohan soundtrack collections. It's great to see them working to release these great film and tv sets. -Jason (SpyVibe.com)