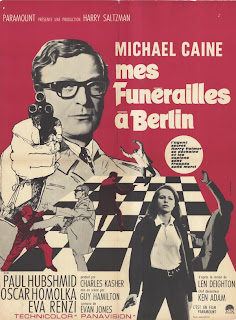 The Los Angeles County Museum of Art will screen Funeral In Berlin on Saturday, February 21 at 9:15PM as part of their series "Torn Curtain: The Two Germanys on Film" examining films set in Cold War Germany. The Guy Hamilton-directed middle installment in the Sixties Harry Palmer trilogy will be paired with Robert Siodmak's Escape From East Berlin. I haven't seen the latter, but while it does sound cool, it doesn't appear to be a spy movie. The 1962 movie concerns twenty-nine East Germans who fled Communist rule by tunneling under the Berlin Wall. The whole film series ties in with the museum's current exhibit "The Art of Two Germanys/Cold War Cultures." That's a good exhibit, and LACMA's got a great screen, so if you're in the area I definitely recommend taking advantage of this opportunity!
I started out intending to showcase relevant spy screenings all over, but it became tough to keep track. I apologize to all the non-LA readers for focusing as a result on Los Angeles screenings, but they're certainly foremost on my mind being based here. I will try to start covering screenings in other cities more often.
Posted by Tanner at 12:41 PM

Thanks for posting- I've spread the word at SpyVibe, as well.