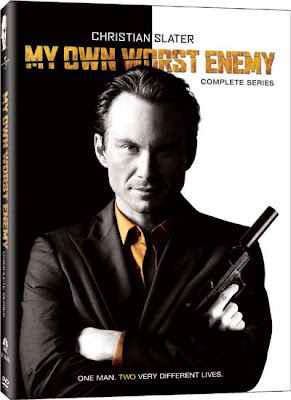 My Own Worst Enemy Cover Art

TVShowsOnDVD has revealed the cover art for Universal's previously announced upcoming DVD of My Own Worst Enemy: The Complete Series. I've gotta say, that artwork's kind of neat! All nine episodes will be included on two discs. The set is available for pre-order on Amazon.

Echelon Conspiracy
Usually I report on upcoming spy movies when they're first announced in the trades, and sometimes again as the cast is revealed or more news comes out. But sometimes they get by me completely. I just saw a trailer for a movie called Echelon Conspiracy that appears to be a spy movie. The cast includes Edward Burns, Ving Rhames, Jonathan Pryce and Martin Sheen... so it is a real movie. It comes out in theaters in the United States on February 27. It should not be confused with The Echelon Vendetta, a similarly titled novel by David Stone that was optioned last year and is being adapted for the screen by the director of The Wackness.

Echelon Conspiracy (the one that's coming out in a few weeks) concerns a guy whose cell phone starts giving him mysterious instructions that attract the attention of the CIA and the NSA, so it sounds a little bit similar to last year's Eagle Eye. According to Wikipedia, "ECHELON is a name used in global media and in popular culture to describe a signals intelligence (SIGINT) collection and analysis network." In other words, an all-knowing computer system, pulling data from phone calls and email and eavesdropping and other electronic resources all over the world via sattellite. It comes up again and again in modern spy movies and TV shows, from Alias (which made wide use of it) to the aforementioned Eagle Eye. The website for Echelon Vendetta lets you input questions for ECHELON and have a conversation. Here is a conversation I just had with it at its own website:
Visitor> when does echelon conspiracy open?
ECHELON> What if I said it never does?
Visitor> Does it?
ECHELON> Suppose I said it does.
Visitor> Is the movie any good?
ECHELON> If it is, then I'll be very surprised.

So there you have it, from the mouth of the computer itself! Good advertising, that.
Posted by Tanner at 12:02 PM